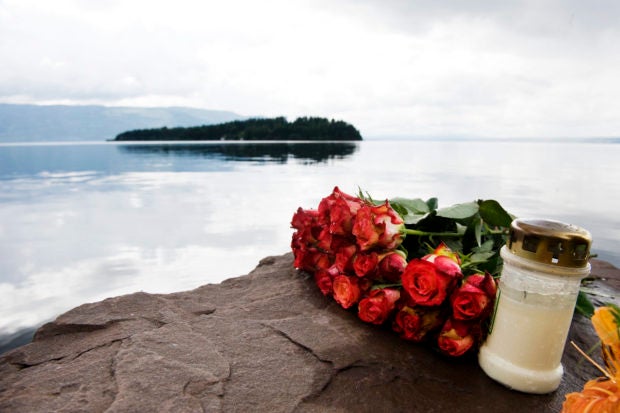 (FILES) This file photo taken on July 24, 2011 shows flowers and candles laid down in commemoration of the victims of the July 22, 2011 shooting spree at a Labour Party youth summer camp on the island of Utoya, on July 24, 2011; the Utoeya island, 40km south west of Oslo, can be seen in the background. – Ten years after killing 77 people in Norway, right-wing extremist Anders Behring Breivik will on January 18, 2022 ask a court for parole, which the victims’ families fear will give him a stage for his political views, even if it is expected to be denied. (Photo by Jonathan NACKSTRAND / AFP)

OSLO — Just 10 years after carrying out the deadliest peacetime attack in Norway, right-wing extremist Anders Behring Breivik will on Tuesday ask a court for parole, a request widely expected to be denied.

But the families of his victims, who fear he will use the hearing as a stage to air his political views, are calling for him to be deprived of the attention he is seeking.

For security reasons, the district court in the southern region of Telemark will hear Breivik’s request for conditional release in the gymnasium of Skien prison, where he is incarcerated.

In 2012 Breivik, who killed 77 people during the massacre, got 21 years in prison, which can be extended indefinitely as long as he is considered a threat to society.

At the time, that was Norway’s harshest sentence, though the law has since been changed to allow for the possibility of handing down longer jail terms.

He had to serve at least 10 years before he could make his first request for conditional release.

On July 22, 2011, Breivik, now 42, killed eight people when he set off a truck bomb near the government offices in Oslo, then gunned down 69 others, most of them teenagers, at a summer camp for the Labour party youth wing on the island of Utoya.

He said he killed his victims because they embraced multiculturalism.

Breivik’s attacks were Norway’s deadliest since World War II, and his request is widely expected to be rejected.

“As in any other state governed by the rule of law, a convict has the right to request conditional release and Breivik has decided to exercise this right”, his lawyer Oystein Storrvik told AFP.

In the courts and in his communications, including those to AFP, Breivik has in the past claimed to have distanced himself from violence.

But Tore Bjorgo, the head of the Centre for Research on Extremism (C-REX) at the University of Oslo, said: “He has not become less of an extremist from an ideological standpoint.

“He now presents himself as a National Socialist and even though he says that as far as he is concerned the armed fight is a phase of the past, he has in no way distanced himself from the mass killing he committed and which he considers totally legitimate.”

In 2016, in a lawsuit he brought against the Norwegian state to protest against his prison isolation, he compared himself to Nelson Mandela, saying he had transitioned from armed conflict to political fight.

But the extremist, who killed most of his victims with a bullet to the head, has never expressed any credible remorse.

He has used each court appearance to spread the propaganda he set out in the manifesto he published just before committing his attacks. His court hearings have been peppered with Nazi salutes and rambling ideological monologues.

For the families of his victims, each new court hearing and his ensuing stunts have been an ordeal.

Ahead of this latest hearing, which is scheduled to last three days and will be broadcast live, a support group for the families said it wanted to “encourage as little focus as possible on the terrorist and his message.

“Any mention of this case in general, and the terrorist in particular, is a great burden for survivors, parents, and those affected by the terrorist attacks in Norway”, it said.

The 2011 massacre has inspired other attacks, including that in Christchurch, New Zealand in 2019, as well as other foiled attacks around the world.

Few in Norway question Breivik’s right to seek parole after just 10 years, largely because it is widely expected to be denied.

Of greater concern has been the attention he will get during the hearing.

“I feel it’s quite absurd that he is allowed so much attention by asking for his release after only 10 years,” Lisbeth Kristine Royneland, head of the support group and who lost an 18-year-old daughter on Utoya, told Norwegian broadcaster NRK.

Despite the exceptional nature of his crimes, Norway makes a point of treating Breivik like any other inmate.

In 2016, Breivik — who has three cells at his disposal in prison, with a television and DVD player, a game console and a typewriter — got the Norwegian state convicted of “inhumane” and “degrading” treatment because of his isolation from other inmates.

The verdict was overturned on appeal.

“The trials and the way in which they were conducted are in a way a victory of the rule of law over the terrorist Breivik” who wanted to destroy it, said C-REX’s Bjorgo.