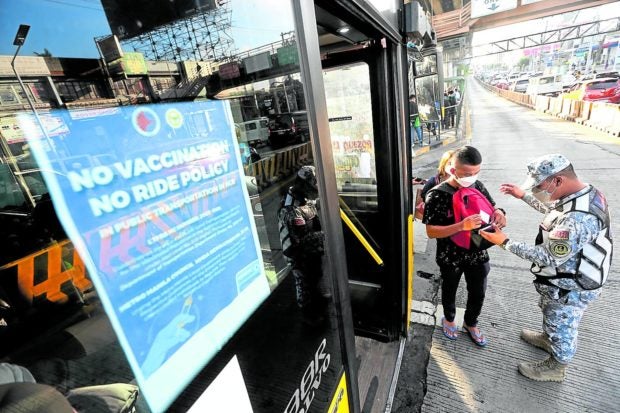 BOARDING PASS A staff of the Inter-Agency Council for Traffic ensures that only passengers who present valid vaccination and identification cards are allowed to board buses at Edsa Bus Carousel station on Main Avenue, Quezon City, as the government implements the “no vaccination, no ride” policy in Metro Manila’s public transportation on Monday. —NIÑO JESUS ORBETA

This transpired after Transport Secretary Arthur Tugade reminded traffic enforcers to be “tolerant and patient, but firm” in penalizing violators on its first day, as critics again sounded the alarm for possible abuses in enforcing Department Order No. 2022-1.

Under the DO, only fully vaccinated people are allowed to take public transport. They must also show proof of vaccination to drivers before being allowed to ride.

Despite the department’s supposed light-handed approach, minor incidents still marred the policy’s first day. Some jeepneys, for example, still ended up getting ticketed, while bikers were also apprehended if they failed to show proof of vaccination.

Assistant Transport Secretary Goddes Libiran said these apprehensions were made by traffic enforcers employed under the city government.

“The DOTr, i-ACT, LTO (Land Transportation Office) and LTFRB (Land Transportation Franchising and Regulatory Board) and even the HPG (Highway Patrol Group) are just giving warnings today,” she told reporters on Monday. “But we don’t have jurisdiction over [local government] enforcers because they are enforcing it anchored on their respective ordinances.” Even so, the department warned it would start issuing tickets on Tuesday, against PUVs who fail to check whether there are unvaccinated persons among their passengers.

The penalties are stiff for offenders. According to Tina Cassion, executive director of the LTFRB, they would also consider this as a breach of franchise conditions.

If found erring, violators may face a fine of P5,000 for the first offense; P10,000 and a 30-day impounding for the second offense, and P15,000 and franchise suspension/cancellation for the third and subsequent offenses, she added.

They would also recommend to the LTO that the driver’s license be suspended.

Meanwhile, the Manila International Airport Authority (MIAA) appealed to passengers to wait for the results of their swab test before going to the airport due to the increasing number of passengers who turned out to be COVID-positive after the interception of airport guards.

From Jan. 1 to Jan. 15, 68 passengers were stopped at the departure areas as the guards verified their travel documents. Most of them said they did not check their test results before going to the airport.

“The numbers are really appalling. This behavior of some airline passengers is truly disturbing, especially now that cases of infection [are] growing by the day,” Ed Monreal, general manager of the MIAA, said in a statement on Monday.

The airport chief further reminded domestic passengers to have their vaccination cards and valid government ID on hand following the DOTr’s “no vaccination, no ride” policy.

Philippine Airlines and AirAsia Philippines welcomed the DOTr initiative and assured the public that it would implement safety standards and health protocols in its flights.