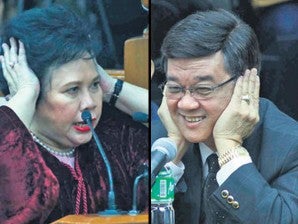 EARFUL An irate Sen. Miriam Defensor-Santiago covers her ears during a tumultuous moment in the impeachment trial of Chief Justice Renato Corona on Wednesday after private prosecutor Vitaliano Aguirre III was caught on camera covering his ears as Santiago was berating the prosecution panel. Aguirre, who said his ears “were hurting,” was later cited in contempt for disrespect of a senator-judge. SENATE POOL

Private prosecutor Vitaliano Aguirre had had enough of Senator Miriam Defensor-Santiago and had the guts to stand up to her.

In a hearing marked by high drama, Aguirre covered his ears with his hands while the prosecution panel was receiving yet another a tongue-lashing from Santiago, this time for its sudden decision on Tuesday to rest its case against Chief Justice Renato Corona.

For that “contemptuous” behavior, Aguirre earned the ire of not just Santiago but the entire Senate impeachment court, which cited him in contempt on Day 26 of the impeachment trial, ironically a day after the prosecution had rested its case.

“I charge this private prosecutor with contempt of this impeachment court! I have evidence right here taken by Senator Alan Peter Cayetano, and to say that nasaktan ang tenga ko (my ears hurt) should have been (a cause) for you to walk out of this impeachment court. But you cannot make those contemptuous gestures in front of a judge, and get away with it,” Santiago declared.

Cayetano himself took the picture using his cellular phone camera.

Santiago made the motion to cite Aguirre in contempt soon after the volunteer lawyer candidly admitted to the impeachment court that he did cover his ears.

Estrada had inquired into Aguirre’s motive for publicly displaying his disdain for Santiago.

“It seemed that you don’t want to listen to her,” Estrada said. “That’s disrespect for a member of this court.”

Aguirre argued that he had to cover his ears because he did not agree with Santiago’s position that it was not usual for lawyers to withdraw, or amend their complaints.

“This happens every day. The fact is that this is the first time that I experienced in my 40 years of practice that a judge would lecture his lawyers. That’s not proper,” Aguirre said.

Told by Estrada that he should have objected to Santiago’s manifestation, Aguirre retorted that he had “no right to object.”

Under the Senate rules, private prosecutors are under the supervision of the prosecution panel and can not debate with the senators.

Aguirre said: “May I say something? If my actuation has hurt somebody, I really did it purposely because my ears were hurting from her shrill voice. My point here is that even if we’re mere lawyers, we also deserve respect. If you demand respect, respect also these lawyers because human dignity has no equal.”

After the hearing, Santiago, whose blood pressure shot up to 190/90, said it was Aguirre’s problem how to deal with the citation. Citing her colleagues, she said Aguirre had been calling attention to himself during the hearing.

“I’m too old to take this thing personally. I think he has just a mental disorder. A lawyer will never, never aggravate the judge,” she said. “Maybe he just wanted the prosecution to lose, or to publicize himself.”

She said she was “happy” that the senator-judges were unanimous in citing Aguirre for contempt.

In a statement later, Santiago said it appeared that Aguirre might have been “planted” to provoke her and raise her hypertension to a higher level, “precipitating either a stroke or a heart attack.”

Quoting her staff, she said that Aguirre had always been seated in the gallery until Wednesday, and “would always sneer at me very loudly.”

“All of a sudden, he sat smack dab in the middle of the front row of the prosecution panel,” she said.

“With these tactics, the usual suspects are up to their dirty tricks,” she said.

At the trial, Santiago twice took the rostrum to blast the prosecution over the withdrawal of five of eight articles of impeachment and their manifestation to make their formal offer of evidence within three days. In both instances, Aguirre, who was seated in the row of the prosecution table, was seen covering his ears with both hands.

“I should be recognized first by this honorable impeachment court to state what I feel. But since I’m already here, I will say what I feel.”

At this point, an angry Santiago reiterated her motion for contempt.

“Imagine if all the lawyers did that in front of the impeachment court, if all of the senator-judges took the (floor) to express his opinions … (if) you don’t agree with (us) then don’t listen to us, get out of the courtroom!” said Santiago, a former trial judge known for berating lawyers who did not measure up to her courtroom expectations.

Aguirre swiftly replied: “I was about to leave but …”

“Granted!” Santiago roared. “If that is in the form of a motion, go ahead! You’re challenging me!”

Senate President Juan Ponce Enrile pleaded for the parties to remain “calm in this proceeding and deal with one another in a fashion that will not a create an impression before the people that we are not following the rules.”

Before things got out of hand, Enrile banged the gavel to suspend the session.

But seething with anger, Santiago strode toward Aguirre and confronted him.

“What?” Santiago taunted him, her eyes fixed on Aguirre for a few minutes.

At this point, prosecutors and senators restrained the two.

Aguirre was ushered out of the courtroom by House staff members, while Santiago stayed in her seat during the long suspension in the trial, alternately talking with Senators Alan Peter and Pia Cayetano, Loren Legarda, Vicente Sotto III and Estrada.

Sotto, the majority leader, later told the Philippine Daily Inquirer that the senators would take up the penalty to be imposed on Aguirre in a caucus on Tuesday.

“I don’t know if this is serious or not but it is being suggested by Senators Francis Escudero and Panfilo Lacson that we place attorney Aguirre in a room in front of a television set playing the videotape of one of Miriam’s privilege speeches.”

Sotto said he was not kidding because “it’s being suggested, with a request that Aguirre would not be allowed to cover his ears.”

Before the face-off with Aguirre, Santiago slammed the prosecutors for airing charges that they now refuse to prove, saying that they had compromised Corona’s “moral position.”

“I am terribly concerned that this might constitute unethical behavior in this trial court,” she said.

“We have a term of art—‘frivolous and sham’—that can be taken in its technical meaning. A frivolous claim refers to a motion or lawsuit motivated by intent merely to harass, delay or embarrass the opposition. The claim must have no arguable basis in law or in fact,” she explained.

Santiago wondered whether prosecutors “acted in good faith” when they told the impeachment court in a legal compliance submitted in January that they would present evidence and witnesses for eight articles.

“Because now you turn around and say you don’t want to do that,” she noted.

Santiago said some colleagues had read and studied all eight articles in fulfillment of their functions as senator-judges.

Santiago said that her suspicion was bolstered by the prosecution panel’s continuing habit of announcing to media that its evidence can already prove Corona’s guilt.

“I am very concerned that the prosecution has been acting in bad faith all along because you tell so many things to media when you can file an official manifestation in this court. You insist you are already winning the court battle because you have proof beyond reasonable doubt. Good grief, that is contempt of court,” she said.

Santiago reiterated an earlier charge that the prosecution’s discussion in press conferences of charges they planned to prove was a case of trial by publicity and was a clear prejudgment of Corona’s case.

Wednesday’s action-packed hearing was heralded by Santiago’s manifestation virulently attacking the prosecution for dropping five of the eight articles of impeachment against Corona.

“I felt like creeping back into bed and adopting a fetal position, which is the normal reaction of any sane person when he’s faced with a world that is crumbling around him. I no longer know what universe I’m in … because I’ve never seen this done to a judge before,” Santiago said.

She blasted the prosecution, calling it names such as the offensive word, “gago.”

Upon a motion from the House deputy lead prosecutor, Ilocos Norte Representative Rodolfo Fariñas, this unparliamentary remark was later stricken from the record, with no objection from Santiago herself.

Scolding the prosecution, the senator said the prosecution was “playing games” with senator-judges in dropping the five articles after promising earlier to present about 100 witnesses.

“I was not born yesterday. We will be studied generations from now. This is a travesty. I request the secretariat to record in the journal that I said, ‘Wah!’” she said.

After the blast, Sotto said that Senator Serge Osmeña had asked, “What’s the spelling of ‘Wah?’”

No one asked Santiago what that term of endearment was all about.