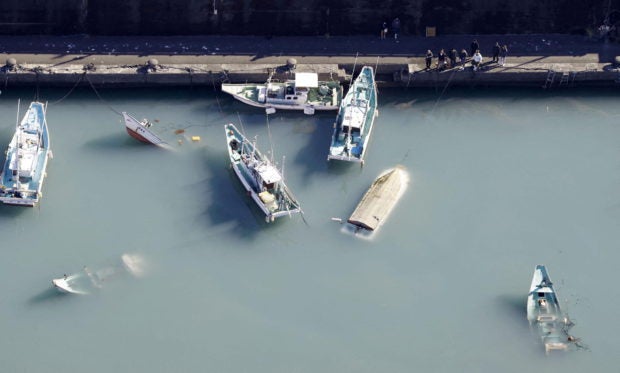 An aerial view shows capsized boats believed to be affected by the tsunami caused by an underwater volcano eruption on the island of Tonga at the South Pacific, in Muroto, Kochi prefecture, Japan, in this photo taken by Kyodo January 16, 2022. (Kyodo/via REUTERS)

An underwater volcano off Tonga erupted on Saturday, triggering a tsunami on the shores of Tonga and cutting off phone and internet lines for the entire island.

There are no official reports of injuries or deaths in Tonga as yet but communications are still limited and outlying costal areas remain cut off.

A New Zealand Air Force P-3K Orion aircraft left from Auckland on Monday to assist in an initial impact assessment of the area and low-lying islands, the New Zealand defence forces said on Twitter.

New Zealand’s Prime Minister Jacinda Ardern said on Sunday that the tsunami had a significant impact on infrastructure.

Red Cross said it was mobilising its regional network to respond to what it called the worst volcanic eruptions the Pacific has experienced in decades.

“From what little updates we have, the scale of the devastation could be immense, especially for outer lying islands,” said Katie Greenwood, IFRC’s Pacific Head of Delegation.

“Red Cross currently has enough relief supplies in the country to support 1,200 households with essential items such as tarpaulins, blankets, kitchen sets, shelter tool kits and hygiene kits,” she said.

The agency said there were concerns that communities may not have access to safe drinking water as a result of saltwater inundation caused by the tsunami waves and ashfall.

Shelter is also a concern, particularly for those communities near the coastline, it added.

United Nations Secretary General Antonio Guterres said on Twitter that the UN offices in the Pacific are on standby to provide support.

The Hunga-Tonga-Hunga-Ha’apai volcano has erupted regularly over the past few decades but the impact of Saturday’s eruption was felt was far away as Fiji, New Zealand, the United States and Japan. Two people drowned off a beach in Northern Peru due to high waves caused by the tsunami.

About 26 hours since the eruption, nations thousands of kilometres to the west have volcanic ash clouds over them, New Zealand forecaster WeatherWatch said in a statement.

Fiji, Vanuatu and New Caledonia are affected and the ash cloud is expected to fan out towards eastern Australia on Monday, it said.

“This is an eruption best witnessed from space,” Cronin said.

“The large and explosive lateral spread of the eruption suggests that it was probably the biggest one since about the 1991 eruption of Pinatubo,” Cronin said.