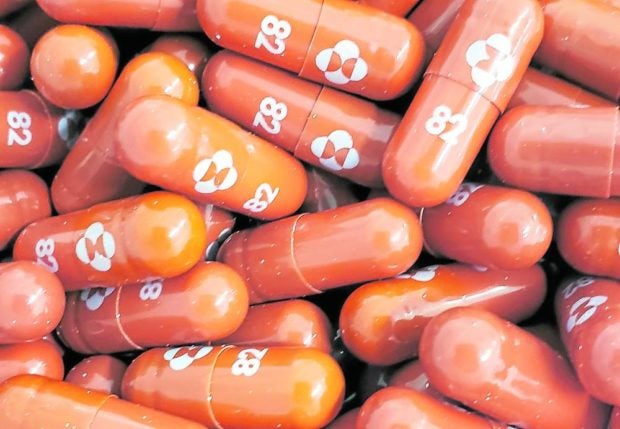 MANILA, Philippines — The Food and Drugs Administration (FDA) has cautioned the public against buying the COVID-19 pill molnupiravir from illicit sellers, who have taken advantage of the latest surge of coronavirus cases driven by the highly contagious Omicron variant.

The regulator warned of “serious health risks” when buying the product from unauthorized sources, as it noted that molnupiravir has not been approved to be sold commercially.

On Friday, the FDA issued a public health warning against the now widespread sale of the Merck-manufactured experimental drug.

“This sudden demand has attracted unscrupulous individuals or organizations from distributing and selling this drug product in the market at a much higher price even without the required authorization from this office,” the agency said.

It added that “buying medicines in unlicensed establishments or over the internet can pose serious health risks.”

The FDA further pointed out that “a medicine bought in an unlicensed establishment or online cannot be guaranteed as genuine and may contain no active ingredient, too much or too little active ingredient which may result in the condition/ailments not being treated correctly.”

“Also, this medicine may not be stored correctly in accordance with its appropriate storage condition,” it added.

Molnupiravir was made available as an investigational drug for the treatment of COVID-19 through a compassionate special permit (CSP) granted by the FDA.

According to the agency, the CSP is issued to select physicians and hospitals for the use of an unregistered drug, while an emergency use authorization (EUA) allows wider use of unregistered drugs and vaccines in a public health emergency.

The drug is provided by an FDA-licensed manufacturer or importer.

On Dec. 22, the FDA granted an EUA for Molnarz, the brand of molnupiravir made by Aurobindo Pharma, one of the Indian manufacturers of the 200 mg capsule.

The EUA, however, is not a marketing authorization so the drug, like all COVID-19 vaccines also granted EUAs, still cannot be sold commercially.

In an advisory, the FDA reminded medical professionals and the public that the EUA for molnupiravir is not “an authorization to market the drug commercially” and that its procurement and distribution should follow the guidelines issued by the Department of Health (DOH).

“Health-care professionals, patients and consumers are strongly advised to access molnupiravir only through the [DOH] as the national procurer for drug products under EUA or [through] hospitals/institutions granted…CSP,” the FDA said.

The agency also urged the public to report the illegal sale of molnupiravir by emailing [email protected] or www.fda.gov.ph/ereport, or by calling the Center for Drug Regulation and Research at (02) 8809-5596.

A local drugmaker last week said it could produce huge volumes — around a million capsules per batch — of molnupiravir as soon as it gets the necessary approval from the FDA.

Developed by US drugmaker Merck & Co. Inc., molnupiravir is considered the first oral antiviral pill for mild and moderate cases of COVID-19.

Merck signed a voluntary licensing agreement with eight Indian manufacturers to come up with generic versions of the drug at a much lower cost to make it accessible to poorer nations.

A five-day molnupiravir treatment reportedly costs about $700 in the United States.

The antiviral medication introduces “copying errors” into the genetic code of the virus during RNA (ribonucleic acid) replication, making the virus harmless. This prevents the deadly growth and spread of COVID-19 in the body.

The breakthrough pill could be given only to adults 18 years old and above who are found positive for COVID-19 and with risk factors for developing severe illness, such as senior citizens and those with comorbidities.

But it could not be given to those with severe symptoms or those with low oxygen level, as well as pregnant and lactating women.

On Oct. 5, then FDA Director General Eric Domingo announced that four hospitals had been given CSPs for the use of Molnupiravir.

The Philippines was included in clinical trials of the drug, which were conducted here in such hospitals as the Lung Center of the Philippines. The FDA did not disclose the initial list of medical institutions granted the CSP.

Three weeks later, the number of hospitals with CSPs rose to about 30, but these health facilities were not named to protect the patients’ privacy, the FDA said.

Last November, Merck said its molnupiravir pill, which it developed with Ridgeback Biotherapeutics, showed a 30-percent reduction in hospitalizations and deaths. This was lower than the 50-percent efficacy indicated by earlier data.