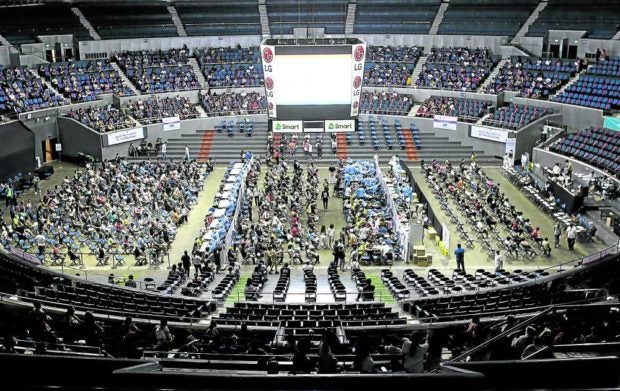 A DIFFERENT BALL GAME Hundreds line up for their COVID-19 booster shots at Smart Araneta Coliseum in Quezon City on Saturday when health officials confirmed the local spread of the Omicron variant around Metro Manila. —RICHARD A. REYES

MANILA, Philippines — The independent analytics group OCTA Research on Sunday estimated that Metro Manila’s actual COVID-19 cases could be six to 15 times higher than the official numbers being reported by the Department of Health (DOH) in its daily case bulletins.

OCTA Research fellow Guido David said they reached this estimate based on the random rapid tests conducted by the Department of Transportation on railway passengers on Jan. 12 and Jan. 13 wherein 12.4 percent of those tested were positive for the virus.

Assuming Metro Manila’s population of 14 million, this meant an estimated prevalence range of infection of 7.4 to 17.4 percent (based on a margin of error of plus or minus 5), which David said could mean that about 1.04 million to 2.44 million people in Metro Manila were infected as of Jan. 13.

Since the official data reported only 165,000 active COVID-19 cases (or people still sick with the virus) in Metro Manila that day, David said “this means that the actual number of cases, which include asymptomatic and symptomatic cases not tested, and those tested with antigen but not reported, could be six to 15 times higher than the official numbers reported by the DOH.”

OCTA Research noted though that Metro Manila’s seven-day growth rate of COVID-19 cases has dropped to 2 percent on Saturday from 3 percent the previous day.

However, David said the decline in new cases could either mean that cases have already peaked or the testing capacity has reached its limit.

“The decrease in growth rate could have two possibilities: the trend of new cases in the [Metro Manila] is close to the peak, or new cases in the NCR are limited by the testing capacity [which means] the volume of testing is not sufficient given the number of new cases,” he said.

New COVID-19 cases slightly dipped on Sunday to 37,154 from nearly 40,000 the previous day, although this was the sixth day in the past week that daily new cases exceeded 30,000.

The DOH also confirmed 50 more deaths due to COVID-19, some of whom died from as far back as June last year.

Total confirmed COVID-19 cases nationwide have ballooned to 3,205,396 amid the raging Omicron variant-driven surge, while the confirmed death toll now stood at 52,907.

Three out of four of the coronavirus cases detected in the past two weeks (Jan. 3 to Jan. 16) were in Metro Manila (43 percent); Cavite, Laguna, Batangas, Rizal, and Quezon, or Calabarzon (23 percent); and Central Luzon (9 percent), the DOH added.

The number of people still infected with the virus reached 287,856 as of Sunday, the fifth straight day of record-high active cases.

This was the second-highest positivity rate since data became available. The numbers reported on Sunday did not include those from 12 laboratories that failed to submit their test results to the COVID-19 Document Repository System.

The DOH said 28 percent of ventilators available for Metro Manila COVID-19 patients were in use, against 21 percent for the whole country.