IATF protocols now apply to travelers who arrived on or before Jan. 13 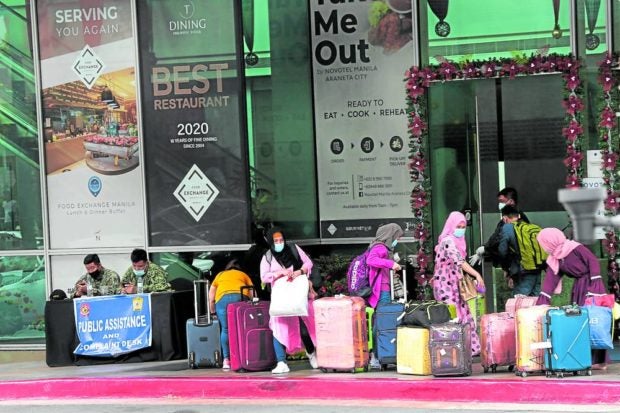 EASED RULES Fully vaccinated travelers from green-list countries may now skip hotel quarantine and need only to self-monitor for any sign or symptom of COVID-19 within seven days after their arrival. —GRIG C. MONTEGRANDE

MANILA, Philippines — The Inter-Agency Task Force for the Management of Emerging Infectious Diseases (IATF) has retroactively extended its new quarantine and testing regulations to all Filipinos and foreigners who arrived from green and yellow list countries prior to Jan. 13.

Cabinet Secretary Karlo Nograles said in a statement that the task force last Saturday approved the application of the testing and quarantine protocols for green and yellow list areas under IATF Resolution No. 157 to all those who arrived in all ports of entry in the Philippines on or before Jan. 13, the day the new rules took effect.

Countries in the green list are those classified by the IATF as “low-risk” jurisdictions and territories, while those in the yellow list are considered “moderate risk.” The red list includes “high-risk” countries and territories, or places experiencing severe spikes in COVID-19 infections.

Nograles, who is also IATF cochair, said the task force directed all implementing government agencies to ensure the smooth and proper enforcement of the new protocols, which are intended to screen vaccinated and unvaccinated Filipinos and foreign nationals entering the country from abroad.

The relaxed rules allow Filipinos and foreigners arriving from green-list countries to no longer undergo the mandatory facility-based quarantine if they are fully vaccinated. They only need to self-monitor for any sign or symptoms within seven days after their arrival. Under the old rules, the vaccinated passengers were required to undergo facility-based quarantine until the release of their negative reverse transcription-polymerase chain reaction (RT-PCR) test taken on the third day, after which they were further required to complete their quarantine at home until the 10th day.

For the unvaccinated, they will now be tested on the fifth day of their facility-based quarantine instead of the seventh day under the old rules.

For vaccinated persons coming from yellow list countries, the new and old rules state that they must take their RT-PCR test on the fifth day of their facility-based quarantine. Those who test negative, however, may now complete their quarantine at home up to the seventh day, instead of up to the 14th day under the old rules.

Nograles said the IATF also clarified that foreigners coming from red-list countries and allowed admission to the Philippines under existing IATF rules could do so provided they have valid or existing visas. The task force also stressed that the entry of these foreigners would be subject to Philippine immigration laws, rules and regulations, Nograles said.

As demand for swab tests due to the increasing COVID-19 cases in the country surges, Sorsogon Gov. and senatorial candidate Francis Escudero on Sunday also suggested that the government provide at least one RT-PCR machine in every province.

He said providing even 10 machines per province would cost less than P10 billion, a small amount compared to the P6 trillion in loans by the national government.

Two years since the pandemic, he said the government has not achieved its desired testing capacity to properly address the increasing number of COVID-19 infections.

“What is P10 billion if we can have a mass testing capability that is free for every province in the country?” he added. In the Bicol region, he said only one RT-PCR machine was available in Albay province, thus taking two to three days for swab results to be released.

If elected to the Senate, Escudero said he would push for the passage of the Pandemic and All-Hazards Preparedness Act authored by the late Sen. Miriam Defensor-Santiago. Under the proposed bill, a national health strategy for public health emergencies, a task force on public emergencies, and a medical reserve corps would be established and funded by the government. Had it been passed into law, he said the country would have been more prepared to address the COVID-19 pandemic.