Floods destroy over P400M worth of crops, land in Mindanao—NDRRMC 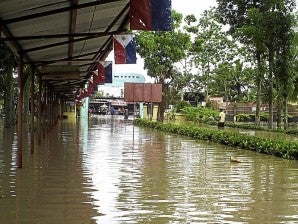 DOWNPOUR IN MINDANAO. Mariano Untal Memorial High School in Mlang, North Cotabato is submerged in knee-deep flood water following a downpour on Thursday evening. Classes in this school has been cancelled. WILLIAMOR A. MAGBANUA/INQUIRER

MANILA, Philippines – Over P400 million worth of crops and properties have been wasted due to flooding in 11 rivers in Mindanao over the past three weeks, the National Disaster Risk Reduction and Management Council (NDRRMC) said.

Uninterrupted rains wrought by a low pressure area off eastern Mindanao caused the rivers to overflow, resulting in huge losses, particularly in agriculture, with damages amounting to P388 million; infrastructure, with P21.47 million; and private properties, with P622,000.

In a report summarizing the human and physical toll of the weather disturbance, the NDRRMC said a total of 12,038 families, or 611,196 persons, across nine provinces, mostly in northern and central Mindanao, were affected.

Five persons drowned, four of them in North Cotabato and the last in Davao del Norte, while two in Jolo, Sulu were reported injured, the agency said. It added that some 3,000 families were taken to evacuation centers.

The report prepared by NDRRMC executive director Benito Ramos was issued at 6 p.m. Wednesday. It detailed the extent of the damage caused by the flooding in the northern and central Mindanao regions, Davao, and the Autonomous Region in Muslim Mindanao.

Based on the report, Maguindanao bore the brunt of the damage, with over 320,000 residents affected and P332 million worth of rice, corn, banana, vegetables, mango and tobacco destroyed.

The report also enumerated actions taken by the NDRRMC in responding to the disaster, including the deployment of trucks to transport evacuated persons and the distribution of relief goods from government agencies and non-governmental organizations.

The ARMM has been placed under a state of calamity due to the heavy rains and floods.