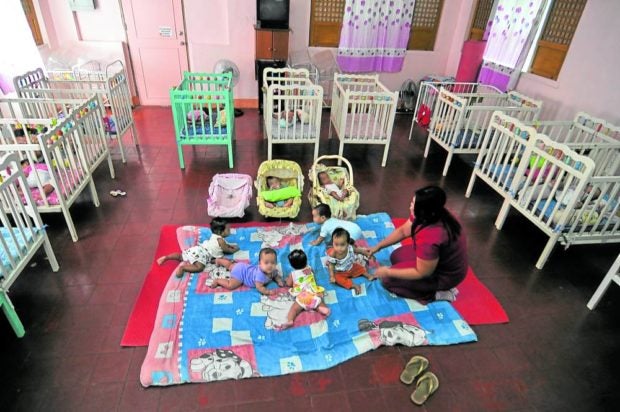 ANGELS IN WAITING A caregiver watches over babies at Hospicio de San Jose, a Church-run orphanage dating back to the Spanish colonial era in Manila, in this February 2012 photo. Couples or families seeking to adopt children may now find the process much easier, thanks to a new law signed by President Duterte earlier this week. —RICHARD A. REYES

MANILA, Philippines — Forming families will now be easier under the country’s new adoption law, according to Romeo Brosas, who spent years in the process of adopting two of his children and now heads a group that assists prospective and adoptive parents.

The law, which President Rodrigo Duterte signed on Jan. 6, removes the judicial process for adoption, as this would now be handled administratively by the National Authority for Child Care (NACC), a new agency created by RA 11642 to be attached to the Department of Social Welfare and Development (DSWD).

This would address a major hurdle that has dragged legal adoption for years and entailed costs, prompting some prospective parents to shun the process, said Brosas, who was part of the technical working group behind the measure.

“The biggest challenge is the judicial process,” he told the Inquirer.

Under previous laws, prospective parents must go through two phases when adopting a child—administrative and judicial.

Couples who wish to adopt are first required to attend adoption forums to assess their motivation and to undergo counseling by a licensed social worker.

Later, they should submit medical, financial and other requirements to a regional office of the DSWD or to accredited child placing agencies.

A social worker would then conduct a home study to assess the prospective parent’s capacity to care for a child. Once approved, there would be a matching or family selection, in which the applicant would get to meet the child.

Approved parents would then be granted preadoption placement authority, which will give them physical custody of the child for a trial period of six months. A social worker will conduct assessment and home visits to determine if the prospective parents should be issued the consent on adoption.

After the DSWD issues the consent, the judicial phase begins. The prospective parents must submit to the court a petition for adoption and go through hearings before they can be approved and issued a decree of adoption and certificate of finality.

The last step is the issuance of an amended birth certificate showing the name of the child that the parents want him or her to take.

Brosas believes the court process to complete an adoption was a redundancy.

He said when a petition is filed in court, the judge would get a social worker for the court who would then ask for the same requirements as the DSWD.

This means the prospective parents must prepare a whole new set of documents, said Brosas.

He added that the court’s social worker could also counter the petition for adoption.

The hearings also take some time, as these could be postponed and delayed further by such circumstances as the judge’s retirement, for example.

Brosas said it’s not unusual for a petition to take years to be resolved, and there have been instances when the process could last as long as eight years.

Brosas himself is familiar with the difficulties in adopting a child.

While adopting his son Blake took him less than two years, the adoption of his daughter Bianca took twice as long.

His petition to adopt Bianca needed the consent of his biological child Bridge—who was not capable, however, of granting such consent because he was diagnosed with autism.

So Brosas had to get a doctor’s certification on his son’s condition before he could file a motion for reconsideration.

With the new law, prospective parents would only need to wait six to nine months, according to Sen. Risa Hontiveros, one of the sponsors of RA 11642.

The law would also lessen the costs entailed by adoption, which Hontiveros said could run into hundreds of thousands of pesos.

Brosas said some lawyers charged as high as P70,000. He said he was lucky to have a lawyer friend who charged him only P20,000.

Other costs include such legal requirements as publication in the newspapers of an order for a hearing.

Under RA 11642, the NACC will exercise all powers and functions relating to alternative child care, including declaring a child legally available for domestic administrative and intercountry adoption, foster care, kinship care, family-like care, or residential care.

The NACC is tasked to ensure that petitions and other matters involving alternative child care are “simple, expeditious and inexpensive, and will redound to the best interest of the child involved.”

The agency will set the fees and the procedures for the administrative process of adoption, which will require social workers and child-placing agencies to conduct a case study of the adoptee, the biological parents and the adopters.

The process involves determining that the adoptee (the child) is legally available for adoption; ascertaining the genuine intentions of the prospective adopters; and ensuring that adoption will be in the best interest of the child.

The NACC will also be the central authority in matters relating to intercountry adoption, which, however, it will not pursue until all possible domestic placements for the child have been exhausted.

A total of 312 domestic adoption cases were recorded in 2019, and there were still as many as 278 cases in 2020, during the COVID-19 pandemic, according to Wilma Naviamos of the DSWD’s Program Management Bureau.

From 2009 to 2020, domestic adoption cases in the country reached 2,815 while 4,396 children were “cleared” for intercountry adoption during the same period, she said in a forum in February last year.

RA 11642 also provides for the revocation of adoption upon the petition of the adoptee, in case of maltreatment, abuse and abandonment.

It likewise prohibits discriminatory acts relating to adoption, such as labeling, shaming, bullying and creating a negative stigma, and sets fines for such violations.

Brosas said those who had the heart to be a parent should be able to create a family and care for a child and not be unencumbered by the old procedures.

—WITH REPORTS FROM INQUIRER RESEARCH