Ignacio Arroyo is home 34 days after his death in UK 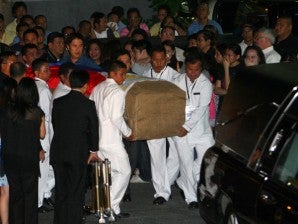 Iggy’s body arrived at Ninoy Aquino Intermational Airport (Naia) Terminal 1 from London via Dubai on board Emirates Airlines flight EK 334 at 9:45 p.m. He was accompanied by his longtime partner Grace Ibuna, her daughter Gabrielle and one of his daughters, Bianca Arroyo.

Ibuna broke down in tears as she met her family at the airport.

In an interview, Ibuna said she only wanted a dignified burial for her partner. She vowed to fulfill what she claimed was Iggy’s last wish: to come home to Negros Occidental.

She stressed that the battle between her and Aleli was not about money.

“For the record, it wasn’t for money. But you would understand that this is not the proper forum for me to discuss anything about that. But I promise all of you that through my lawyer, I will answer all your questions in due time. Just give us time to grieve right now.”

Arroyo passed away in London from a liver ailment, and his death set off a legal battle for the custody of his body.

“We will be going home to Negros. That was his last wish,” Ibuna told reporters.

The repatriation of Iggy’s body, which was originally set last week, had been delayed apparently due to documentation work needed in London.

From Naia Terminal 1, Ibuna and Iggy’s family, including the late congressman’s other daughter, Bernardina Arroyo-Tantoco, proceeded to Pair Cargo warehouse located adjacent to the airport terminal  to receive the body.

It took a while before the body was released from the cargo warehouse because it had to undergo several customs, immigration and quarantine procedures.

Iggy’s body was picked up by  Arlington Funeral Homes at the cargo warehouse. It will stay at Arlington overnight.

Apart from Arroyo-Tantoco, the other relatives of Iggy and Ibuna who were issued access passes by the Manila International Airport Authority (MIAA), upon the request of Edith Cardenas, executive director of the House of Representatives’ Inter-Parliamentary Relations and Special Affairs Bureau, included Paolo Tantoco, Linda Ibuna and Rodolfo Ibuna, among others.

According to Connie Bungag, chief of the MIAA media affairs division, former First Gentleman Jose Miguel Arroyo was among those who was originally supposed to receive the body.

But there were changes made Tuesday night, Bungag said, adding that the former first gentleman’s name was no longer on the list.

The body will be transferred to the Arroyo ancestral home at 14 Badjao St. in La Vista Subdivision, Quezon City Thursday where it will remain until Saturday.

After a 10 a.m. Mass, it will be brought to Iggy and his legal wife, Aleli’s conjugal home, a few doors away at 17 Badjao St., where a wake will be held until March 5.

From the Arroyo conjugal home, the body will be moved to the House of Representatives on March 5 for a necrological service.

At 4 p.m. of the same day, Iggy’s body will be flown to Bacolod City to allow the late lawmaker’s constituents to pay their last respects until March 7.

The body will be returned to Manila on the morning of March 8 and brought to the Arroyo ancestral home. The interment is scheduled on the morning of Friday, March 9 at the Manila North Cemetery near the grave of Arroyo’s mother. Some members of the Arroyo and Tuason clan were also at the cargo warehouse to receive Iggy’s remains.

Loud cries were heard as the casket carrying Iggy’s remains were being loaded to a hearse that took it to Arlington Funeral Homes.

Asked how she wanted Iggy to be remembered, Ibuna said : “He was the kindest man, napakabait nyang tao.”

Before he died, Iggy wanted her to come home to check on his constituents, Ibuna said. “But because of his condition…I hope his constituents would understand. I did not entrust him to anybody else because I want to personally take care of him.”

“He loved his constituents dearly,” she added. “Even up to the last moment, he tried to be strong. He told everyone that he was coming home, this is such a surprise that he would be coming home this way.”

At one point, she referred to Iggy as “my husband” but she immediately asked reporters “to please strike that out.”

“I just want a dignified burial for my husband…sorry, my partner, whatever you may want to call it. I just want him to have a dignified burial and if I agreed with Atty. (Leonard) De Vera’s recommendation, it is in the name of peace. I am also a mother, I also have kids. I treat his kids as my own.  But after the burial, that’s another story,” Ibuna added.