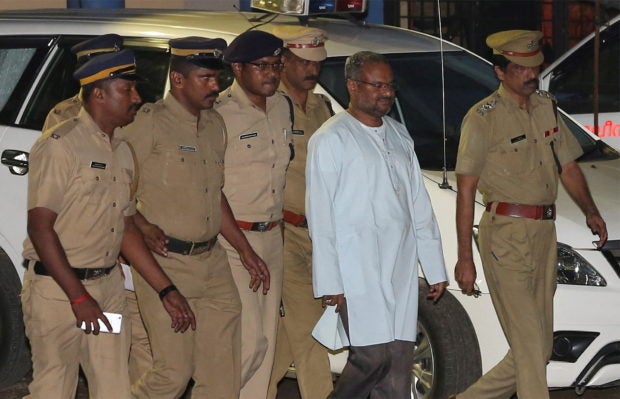 FILE PHOTO: Bishop Franco Mulakkal (2nd R), accused of raping a nun, is escorted by police outside a crime branch office on the outskirts of Kochi in the southern state of Kerala, India, September 21, 2018. REUTERS/Sivaram V/File Photo

KOCHI, India — An Indian court on Friday acquitted a Roman Catholic bishop accused of repeatedly raping a nun for two years in the southern state of Kerala.

“Praise the Lord,” Franco Mulakkal, who spent 25 days in judicial custody after his arrest in September 2018, exclaimed after his acquittal by Judge G Gopakumar in Kerala’s Kottayam city.

The investigating officer in the case, S Harishankar, said afterward that the authorities would appeal the verdict.

Sister Anupama, who had campaigned for the bishop’s arrest, said she and her fellow nuns were surprised at his acquittal.

Mulakkal, 57, was ordained as a priest in 1990 in the northern Indian state of Punjab and was elevated as the bishop of the Diocese of Jalandhar eight years ago.

As protests and calls for his arrest grew in 2018, Mulakkal requested the Vatican allow him to step down temporarily. The Vatican had accepted his request.