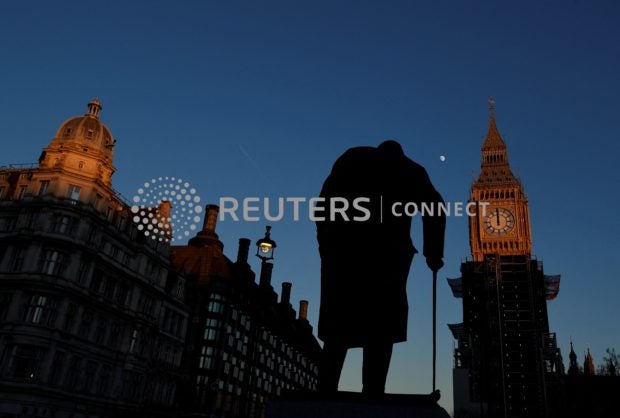 The Elizabeth Tower, more commonly known as Big Ben, is seen with hands fixed at twelve o’clock, whilst Britain’s domestic spy service MI5 has told the House of Commons speaker that the Chinese Communist Party has been employing a woman to exert improper influence over lawmakers, at the Houses of Parliament in London, Britain, January 13, 2022. REUTERS/Toby Melville

LONDON — Britain’s domestic spy service MI5 has warned lawmakers that the Chinese Communist Party has been employing a woman to exert improper influence over members of parliament.

MI5 sent out an alert and picture of the woman named Christine Lee on Thursday alleging she was “involved in political interference activities” in the United Kingdom on behalf of the Chinese Communist Party.

Speaker Lindsay Hoyle, who circulated MI5’s alert to lawmakers, said MI5 had found that Lee “has facilitated financial donations to serving and aspiring parliamentarians on behalf of foreign nationals based in Hong Kong and China”.

Hoyle said Lee had been involved with the now disbanded all-party parliamentary group, Chinese in Britain.

Britain’s interior minister Priti Patel told reporters that Lee’s behavior was currently below the criminal threshold to prosecute her, but she said that by putting the alert out the government was able to warn lawmakers about Lee’s attempts to improperly influence them.

Patel said it was “deeply concerning” that an individual working on behalf of the Chinese Communist Party had targeted lawmakers.

Lee is the founder of a law firm, which has offices in London and Birmingham, according to a government official. A woman who answered the phone at the Birmingham office said: “We are not taking any calls now”. A request for comment left at the London office went unanswered.

The law firm lists on its website one of its roles as legal adviser to the Chinese embassy in Britain.

The Chinese embassy in London said in a statement that China does not interfere in the internal affairs of other countries.

“We have no need and never seek to ‘buy influence’ in any foreign parliament,” it said. “We firmly oppose the trick of smearing and intimidation against the Chinese community in the UK.”

Barry Gardiner, a lawmaker for the opposition Labour Party, said he had received hundreds of thousands of pounds in donations from Lee and said he has been liaising with intelligence services “for a number of years” about her.

“They have always known, and been made fully aware by me, of her engagement with my office and the donations she made to fund researchers in my office in the past,” Gardiner said.

Gardiner employed Lee’s son as a diary manager but he resigned on Thursday.

Iain Duncan Smith, a former leader of Britain’s governing Conservative Party who has been sanctioned by China for highlighting alleged human right abuses in Xinjiang, called for an urgent update from the government on the issue.

He questioned why the woman had not been deported and called for a tightening of the accreditation process for people gaining access to parliament, which he said was too lenient.

Lee is listed under the Christine Lee & Co law firm as a British national in financial filings with Companies House, Britain’s corporate registry.

Former defense minister Tobias Ellwood told parliament of her alleged activity: “This is the sort of grey-zone interference we now anticipate and expect from China.”

Britain’s relations with China have deteriorated in recent years over issues including Hong Kong and Xinjiang.

Last year MI5 urged British citizens to treat the threat of spying from Russia, China and Iran with as much vigilance as terrorism.

British spies say China and Russia have each sought to steal commercially sensitive data and intellectual property as well as to interfere in domestic politics and sow misinformation.

The Chinese ambassador to Britain was banned from attending an event in the British parliament last year because Beijing imposed sanctions on lawmakers who highlighted alleged human right abuses in Xinjiang.

China placed the sanctions on nine British politicians in March last year for spreading what it said were “lies and disinformation” over the treatment of Uyghur Muslims in the country’s far west.