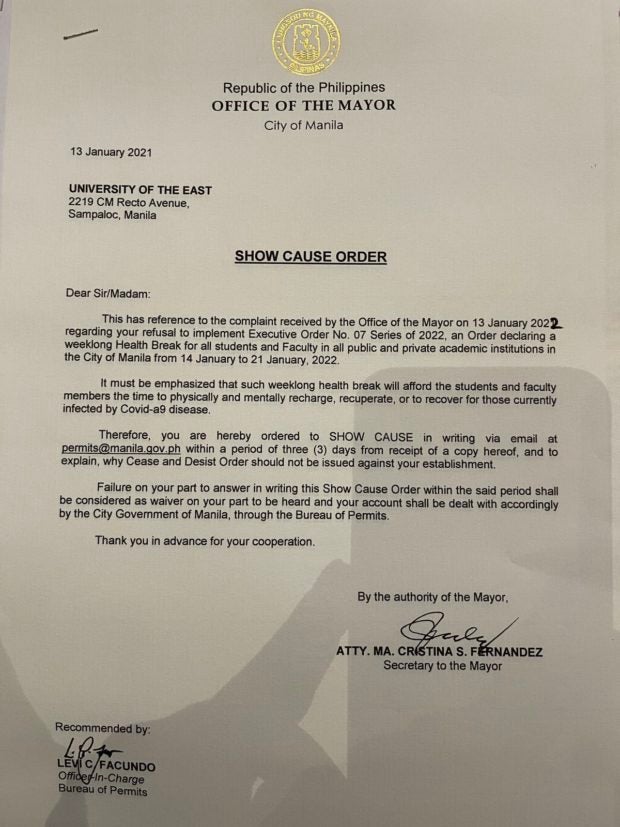 UE Manila announced hours after Moreno issued the health break order that it will be suspending classes from Kinder to Grade 12. However, Moreno’s directive covers class suspension at all levels, in all public and private schools in the city.

UE Manila classes in the Kindergarten to Grade 12 levels, which resumed post-Christmas and semestral break yesterday,…

The show-cause order against UE Manila emphasized that the mayor’s January 14-21 health break directive is meant to let students and faculty members have the time to “physically and mentally recharge, recuperate, or to recover for those currently infected by COVID-19.”

The local government instructed UE-Manila to explain in writing and submit it via email within three days from receipt of the show cause order why a cease and desist order should not be issued against it for defying his health break directive.

“This has reference to the complaint received by the Office of the Mayor on 13 January 2022 regarding your refusal to implement Executive Order No. 07 Series of 2022, an Order declaring a weeklong Health Break for all students and Faculty in all public and private academic institutions in the City of Manila from 14 January to 21 January 2022,” states the show-cause order signed by the Secretary to the Mayor, Atty. Ma. Cristina S. Fernandez.

“Failure on your part to answer in writing this Show Cause Order within the said period shall be considered as a waiver on your part to be heard and your account shall be dealt with accordingly by the City Government of Manila, through the Bureau of Permits,” it further says.

The UE Manila student council said in a separate Facebook post that according to University President Ester Garcia, the suspension of classes for college students or the tertiary level will be decided on January 14.

COUNCIL REPORT | Classes in basic education are cancelled, but not yet for tertiary levelDespite Mayor Isko Moreno's…