DOTR enforcing ‘no vax, no ride’ policy in Metro Manila amid jeers 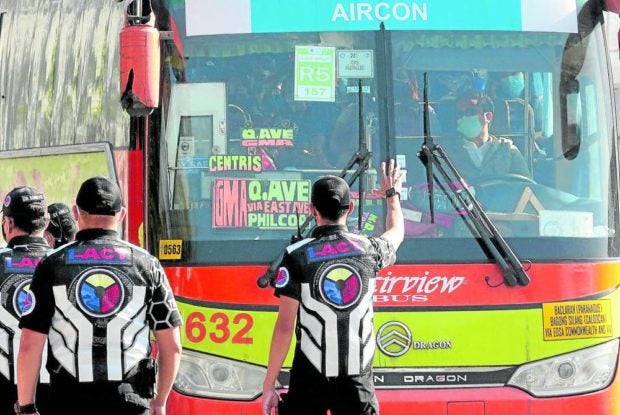 MANILA, Philippines — The Department of Transportation (DOTr) on Wednesday ordered a “no vaccination, no ride” policy for all modes of public transportation in Metro Manila, citing its already high vaccination rate as justification to further restrict the movement of those who have yet to be inoculated.

Transportation Secretary Arthur Tugade signed the department order on Tuesday, which was made available to the media on Wednesday, directing all agencies attached to the DOTr to ensure that operators of public utility vehicles (PUVs) would allow access and issue tickets only to fully vaccinated individuals.

The order, which takes effect starting Jan. 17 (Monday), will apply to all domestic travels to, from and within the National Capital Region (NCR) via land, rail, sea and air public transport, Transportation Undersecretary Artemio Tuazon Jr. told reporters at a virtual press briefing hours after the order was released.

Commuters can present their inoculation status through physical or digital copies of their vaccine cards issued by their respective local government units or certification from the national government.

Tugade’s order exempts from the policy individuals with medical conditions that prevent them from receiving the COVID-19 vaccine, but must present a certification from and the contact details of the physician.

Also exempted are persons who will buy essential goods and services, such as food and medicine “as evidenced by a duly issued barangay health pass or other appropriate proof to support and justify such travel.”

This also includes people on their way to the vaccination sites to be inoculated, according to Tuazon.

“The concerned attached agencies and sectoral offices of DOTr are directed to immediately issue resolutions, circulars, advisories and other notices to implement this [department order],” the DOTr order read.

It will be in effect while Metro Manila is at alert level 3 or a higher quarantine restriction as determined by the government’s pandemic task force.

“There will be points of checking, not necessarily checkpoints, but areas where there would be checking to see if the people inside the public vehicle have vaccination cards,” he explained.

He rejected criticism that the order was a form of discrimination toward unvaccinated individuals and a violation of human rights, pointing out that they could still board private vehicles to go around the metropolis.

“In our Bill of Rights, what is protected is the right to travel. We are not limiting the travel of the commuters, what we are limiting is the use of public transport. They can still go out through the use of their own [vehicles], but not public vehicles,” said Tuazon, who is also a lawyer.

Passengers themselves would not be penalized if they are unvaccinated since only PUV operators and drivers would be sanctioned, depending on the regulations of LTO and LTFRB, Tuazon clarified.

Saying unvaccinated Filipinos were not criminals, presidential aspirant Sen. Manny Pacquiao has objected to the mobility restrictions on unvaccinated individuals.

“Let us not force our countrymen to get vaccinated if this is against their personal beliefs. Let us convince them by explaining vaccines to them, but let us not force them,” the senator said.

In a statement, Pacquiao added: “We should not treat them like criminals. We should not curb their rights to work or purchase essential goods and services.”

Pacquiao maintained that receiving the COVID-19 vaccination was a matter of personal choice and that the government should not restrict those who believed that vaccination was against their personal and religious beliefs.

ACT Teachers Rep. France Castro on Wednesday also slammed the “no vaccination, no ride” policy, pointing out that public transport was a public utility and should not be denied to anyone who needed access to it.

“This policy is simply absurd, unconstitutional, antipoor and discriminatory,” she said in a statement.

“Instead of barring unvaccinated people from using public transport, why won’t the DOTr instead provide free rides to vaccination sites and help the government educate people and curb vaccine hesitancy?” Castro asked.

She pointed out that under Section 12 of Republic Act No. 11525, or the COVID-19 Vaccination Program Act, the vaccine cards should not be considered as an additional mandatory requirement for educational, employment, and government transaction purposes.

She said the DoTR was punishing the people instead of addressing the crisis due to the COVID-19 pandemic.

“How will the Duterte administration convince more than half of the population to get vaccinated if the government will ban the use of public transport? she asked.

—WITH REPORTS FROM JULIE M. AURELIO AND NESTOR CORRALES

Read Next
Army gets tank gunnery simulator
EDITORS' PICK
Acer starts the year off strong with the Aspire Vero National Geographic Edition
Gov’t eyeing COVID-19 tests in pharmacies
Gear up and get ready to play with Yamaha Mio Gear
31,173 new COVID-19 cases push PH’s active tally to 275,364
Municipal court in Pangasinan sets arraignment for ‘Lolo Narding’
Mobile COVID-19 vaccination for commuters, transport workers set at PITX
MOST READ
Imelda Marcos trends on Twitter after octogenarian jailed for allegedly stealing mangoes
Octogenarian jailed for ‘stealing mangoes’ freed after people chip in for bail
If elected VP, Sara Duterte will push for mandatory military service for all Filipinos
Help pours in for octogenarian jailed for ‘stealing’ mangoes in Pangasinan
Don't miss out on the latest news and information.