Lawyer cited for contempt for playing deaf to senator’s tirades 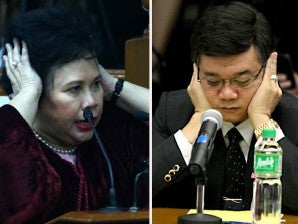 MANILA, Philippines – Tension momentarily gripped the impeachment trial of Chief Justice Renato Corona when Senator Miriam Defensor-Santiago let out a mouthful against the prosecution for dropping some of its charges against the chief justice and then claiming victory after even while the trial was ongoing.

“That’s contempt of court…The arrogance of those who speak like that. How foolish. My goodness,” Santiago said in Filipino.

Added to this was when one of the prosecution lawyers, Vitaliano Aguirre, was caught on television covering his ears while Santiago was lecturing to the prosecution.

But the Senate, acting as an impeachment court, failed to take notice of Aguirre’s action until Senator Jose “Jinggoy” Estrada pointed this out and informed the chamber about the video that caught Aguirre in the act.

Estrada then called Aguirre on the floor and confronted him, telling the private prosecutor that what he did was disrespectful to a member of the impeachment court.

At that point, Santiago stood up to make a point of order.

“I charge this private prosecutor with complaint of this impeachment court. I have the evidence right here…a video by Senator Alan Cayetano. And to say that nasasaktan ang tenga ko [my ears were hurting], should have been cause for you to walk out of this courtroom with permission of the court,” said the senator.

But Enrile, before acting on Santiago’s motion, gave the private prosecutor a chance to explain himself.

Aguirre said he was offended when Santiago lectured to the lawyers like him but could not manifest it in court because he has yet to be recognized to be allowed to speak.

Not satisfied by the explanation, Santiago moved to cite Aguirre for contempt.

“Aalis na nga po sana ako e kaya lang [I would have wanted to leave, it’s just that]…” Aguirre said, but was immediately cut by Santiago who said, “Granted. If that’s in the form of a motion, go ahead. Nanghahamon ka ah [You are challenging me].

Enrile interrupted the exchange and appealed for calm.

But Aguirre went on and justified his action and even admitted covering his ears on purpose.

“I did it purposely kasi totoo naman po na shrill ang voice na nasasaktan ang tenga ko [because it’s true that her voice is shrill and my ears are hurting],” he said, adding that if the senator-judges want to be respected, they should also respect the prosecutors.

Cayetano even asked the Senate to also exclude the private prosecutor from participating in the impeachment trial.

Enrile then ruled in favor of Santiago’s motion to which no member objected to.

“There’s a motion to cite a member of the prosecution panel for contempt and that motion is duly seconded and it can’t be set aside,” he said.

“Indeed, the person concerned was given a chance to explain what he did and why he did it and he openly admitted in court that he did it purposely because he felt offended and therefore it’s a sign of disrespect to a member in this court and that can’t be allowed to pass and must be dealt with according to the rules,” said the Senate leader.

“If there’s no objection to the motion of the lady senator from Iloilo, seconded by senator from Taguig…the gentleman who is a private member of the prosecution panel is hereby cited for contempt and the penalty that will be meted by this court will be taken up in a caucus by this court next week,” Enrile added.

Before the incident with Aguirre, Ilocos Norte Representative Rodolfo Farinas of the prosecution team stood up on the floor to move that the word “gago” (foolish) used by Santiago in her speech be stricken out of the record, which Enrile, immediately granted.

Santiago herself made no objection to Farinas motion.

Santiago even provided comic relief in the trial when she requested the chamber to keep her expression “waah!” on record as she slammed the prosecution’s decision to drop some of the articles of impeachment against Corona.

“I request the secretariat should record in our journal that I said waaah!” she said, making the crowd to laugh uncontrollably that Enrile had to bang his gavel several times.

But this did not stop Majority Leader Vicente Sotto III from joining the fun when he stood up and said, “Thank you, Mr. President, Senator (Serge) Osmena is asking what’s the spelling of waah?”