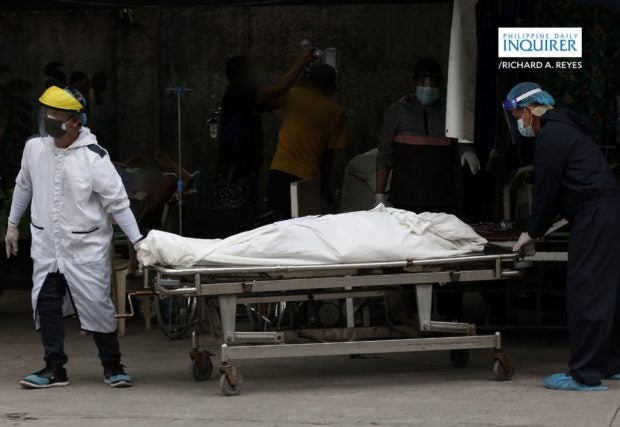 A relative wails over the death of his loved one while being treated in the parking lot of Ospital ng Binan in Laguna province in August, 2021 as the hospital hit full bed capacity amid increasing COVID-19 cases due to the Delta surge. RICHARD A. REYES / INQUIRER

MANILA, Philippines — The number of deaths amid the current surge of COVID-19 cases is “better” than the number of deaths during the wave of Delta variant infections last year, Health Secretary Francisco Duque III said Wednesday.

“It looks like the deaths now continue to go down compared to Delta. This is much… improved. When you talk about deaths, there is no such thing as an improvement but I guess the numbers are better,” Duque said at the Kapihan sa Manila Bay online forum.

(I guess the correct way to say it is that the numbers are better. The number of deaths continues to go down because the severe and critical cases are lower, therefore preventing hospitalizations and deaths.)

According to Duque, the number of severe and critical cases during the current surge, believed to be driven by the Omicron variant, is lower than the surge caused by Delta last year.

“We investigated about 8,500 admissions, and we noticed that in the admission curves, ang baba ng severe (the number of severe cases is low), about 700 cases, seven percent of all the admitted 8,500 cases, and about 217 lang ang critical (only 217 are critical) which is about three percent,” he said.

“But if I were to use the active cases as the denominator, ‘yung mas malaki na (the) 185,000, it is less than one percent, and our critical [cases] only point one percent, so mababa (it is low). Hopefully, it stays that way. Hopefully, our ICU utilization rate continues to be down compared to when the Delta surge is happening,” said Duque.

The World Health Organization earlier said that the Omicron variant of the SARS-CoV-2 virus that causes COVID-19 is still killing people across the globe and should not be dismissed as mild.

“While Omicron does appear to be less severe compared to Delta, especially in those vaccinated, it does not mean it should be categorized as mild,” WHO chief Tedros Adhanom Ghebreyesus said.