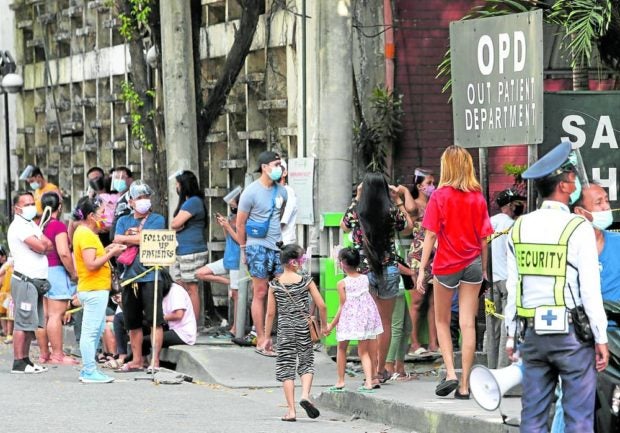 MANILA, Philippines — The Philippines is now at “critical risk” for COVID-19, Health Secretary Francisco Duque III said on Monday night, hours after the country logged a record-high number of cases for the third straight day.

On Tuesday, the country breached the 3-million mark in COVID-19 cases after the Department of Health (DOH) reported 28,007 new infections, bringing the country’s total caseload since the pandemic began to 3,026,473.

Duque said the country had a two-week growth rate in cases of 3,663 percent, while the seven-day moving average number of cases was higher by 690 percent.

“Our country is now at critical risk case classification,” he said in a meeting with President Duterte in Malacañang.

Among the regions, Metro Manila, Calabarzon (Cavite, Laguna, Batangas, Rizal and Quezon) and Central Luzon were considered critical, while others were either at high or moderate risk, Duque said.

Metro Manila, in particular, is now considered under a “severe outbreak” of COVID-19 cases, according to Duque, as it contributed the highest number of cases to the national tally.

Duque said the country’s bed utilization rate was at 40 percent, while the usage rate for intensive care unit (ICU) beds was at 38 percent and 17 percent for mechanical ventilators.

Almost all regions registered an increase in their hospital care utilization rates, he noted, reminding hospitals “to give priority to accepting or admitting moderate, severe and critical cases and to coordinate with our One Hospital Command Center to refer mild and asymptomatic patients to temporary treatment and monitoring facilities.”

Around 55 percent, or 15,256 cases, of the new infections reported on Tuesday were from Metro Manila.

Twelve laboratories failed to submit their data to the COVID-19 Document Repository System.

The positivity rate—or the percentage of people found positive out of the total number who underwent testing—was 44.5 percent, slightly lower than the 46 percent reported the previous day. This was based on 58,409 people tested on Sunday, or smaller than the sample size on Saturday.

The World Health Organization standard is a positivity rate of below 5 percent daily for at least two weeks—the maximum incubation period for the coronavirus — to consider COVID-19 transmission under control.

The DOH also observed an increase in incidental COVID-19 cases, or those who were admitted for other reasons but tested positive for COVID-19.

Citing figures from the Philippine General Hospital (PGH), Health Undersecretary Maria Rosario Vergeire said 53.9 percent of patients were admitted for COVID-19 while 46.1 percent were incidental cases from Sept. 15 to 18, 2021.

The number of incidental cases increased to 88.7 percent during the holiday surge from Dec. 25 to Jan. 7. During the period, only 11.3 percent of patients were admitted at PGH for COVID-19.

Vergeire also said that cases recorded in NCR had 60-percent less chance of hospitalization compared to other regions, especially amid the holiday season.

She said a “decoupling” phenomenon was being observed in NCR. “Decoupling means that although cases are increasing, it does not translate to a large number of severe and critical cases,” Vergeire explained.

“Despite case increases, the national health-care utilization remains to be at low risk. We have 40 percent for our ward beds, while for ICU utilization at 38 percent,” she said.

However, Vergeire said the health-care utilization rate for Metro Manila was already nearing the moderate-risk category.

Despite Duque’s pronouncement, the government’s pandemic task force said there was still no reason to place Metro Manila under the tighter restrictions of Alert Level 4. Metro Manila and several other provinces are under Alert Level 3 until Jan. 15.

Acting presidential spokesperson Karlo Nograles said on Tuesday that the task force decides on the alert level based on the two-week growth rate, Adar and total bed utilization.

While the capital region was considered at critical risk, the use of hospital beds has not reached 71 percent, which was why it remained under Alert Level 3 for now, Nograles said.

He added that the government was ready should there be a need to shift to Alert Level 4.

The government has been preparing the hospitals and has asked them to increase their beds for COVID-19 patients, the official said.

There are also efforts to increase the capacities of isolation and temporary treatment and monitoring facilities, and the government has been augmenting the number of health-care workers, he added.

Health Undersecretary Leopoldo Vega said the DOH has also been expanding its facilities and recently inaugurated 130 beds for moderate and severe cases.

Meanwhile, Duque said that Omicron has replaced Delta as the dominant COVID-19 variant, accounting for 60 percent of the results of the government’s latest genome sequencing.

He said that of the 48 samples tested, 29 had the Omicron variant, while 18 had the Delta strain.

Executive Director Cynthia Saloma of the Philippine Genome Center said Duque was referring to the latest results of the genome sequencing, but added that more data would be needed to determine if Omicron was indeed the dominant variant in the country.