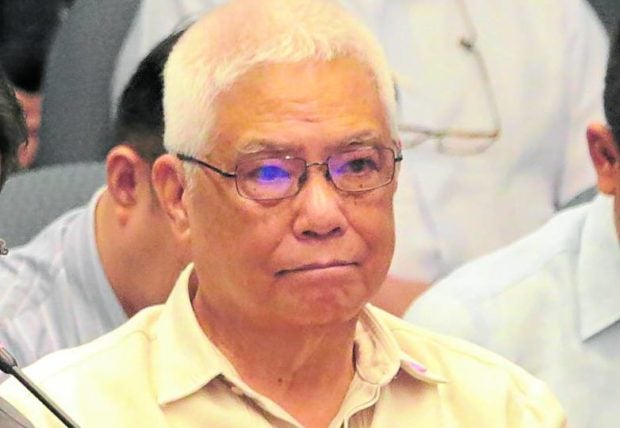 Charges for violating the Anti-Graft and Corrupt Practices Act and the Code of Conduct and Ethical Standards for Public Officials and Employees were recommended against Rio, who headed the Department of Information and Communications (DICT) Technology from 2017 to 2019.

The recommendation was contained in a 40-page report released by the House committee on good governance and public accountability on Tuesday.

Committee chair and Diwa Rep. Michael Aglipay said Rio was negligent “in entering into agreements with the United Nations Development Programme (UNDP), for poor implementation of the project, and his failure to look out for the best interest of the Filipino people.”

In a statement, Aglipay said the report “shows the negligence of the head of agency at that time to implement 6,000 free Wi-Fi sites nationwide, where funding for the project was P 1.3 billion.”

“In the two years of the pandemic, our people deserve free reliable internet for our public school students learning from home. This project was a great concept, but sadly plagued by negligence that made our countrymen suffer,” he said.

The DICT was found to have committed nonfeasance when it transferred the management of P1.3 billion for the Pipol Konek project, and when it failed to “timely regulate and monitor” the project’s implementation and the performance of the contractor selected by the UNDP.

The DICT also committed misfeasance when it entered into a financing agreement with the UNDP for the project, when the agency “could have resorted to procurement on its own, as it did with the other suppliers” for the Fiaap.

Rio was the signatory to the financing agreement, which placed at UNDP’s disposal P1.3 billion in funds to install 6,000 free Wi-Fi sites in remote areas within 18 months.

Reached for comment, Rio defended DICT-UNDP’s free Wi-Fi project and said he was prepared to answer any charges against him.

Rio added the program was “doing well in spite of the complete lockdown imposed on March 15, 2020.”

Rio said the DICT-UNDP free Wi-Fi project for 6,000 hot spots across the country was inaugurated by Information and Communications Secretary Gregorio Honasan on March 5, 2020.

“Congress started investigation on the program around April of 2021, a year after I left DICT, because it was not rolling out as scheduled and some smuggling issues in the [Bureau of Customs],” he said.

“How could I be blamed for the period that I am no longer in DICT when the people who took over to implement the program did not do so?” Rio added.

He said the DICT later abandoned the program.

In December 2021, the House plenary approved a resolution, which called for an inquiry into alleged irregularities in the DICT’s implementation of the Fiaap.

The DICT did not take part in the bidding and selection of the UNDP’s suppliers and service providers.

Speedcast, an Australian firm, was the selected service provider for the first two phases of the program, while PLDT Inc. was selected for the third phase.

Speedcast then contracted the Philippine Communications Satellite Corp. as its subcontractor.

But the DICT-UNDP partnership suffered several setbacks such as Speedcast’s alleged undervaluation of telco equipment, Speedcast’s filing of a petition for financial restructuring, issues in selecting the 6,000 free Wi-Fi sites, and delays in the project’s implementation due to lockdowns and travel restrictions due to the pandemic.

The Commission on Audit found that in the six years of the Fiaap, there was a “low rate of implementation” of the Fiaap, with a zero rate of completion for the public Wi-Fi hotspots under the DICT-UNDP partnership.

Overall, the completion rate for the Fiaap including the UNDP, DICT and Philippine Internation Trading Corp. procurement contracts was only at 15 percent as of December 2019.