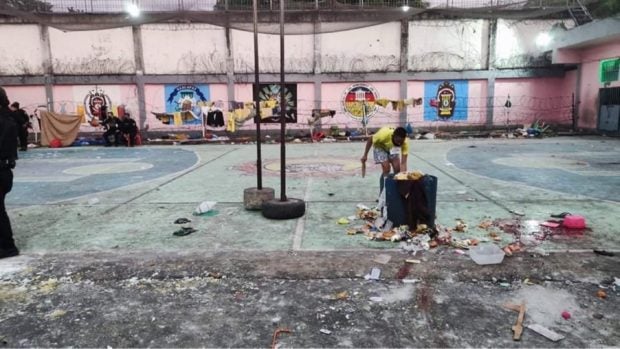 An inmate helps out in cleaning up the mess during the aftermath of the Caloocan City Jail riot. PHOTO COURTESY OF BJMP

MANILA, Philippines — Superintendent Neil Subibi, the Caloocan City Jail warden, was removed from his post after a riot that left six people dead and 33 others injured, Bureau of Jail Management and Penology (BJMP) spokesperson Xavier Solda reported on Tuesday.

(Six PDLs were killed in the incident while 33 others were injured. We are coordinating with the family of the deceased.)

The spokesperson said the Caloocan City Jail remains on heightened alert after the riot on Monday afternoon.

(Caloocan City Jail will remain under heightened alert after the riot yesterday which started when two PDLs lost their temper with each other, until it escalated and became a fight between two big groups.)

Solda said that the situation in the facility is quiet after the City Jail’s dialogue with the inmates.

The jail management also conducted inspections on the inmates’ personal possession to remove any contraband and more personnel are also deployed in the facility to ensure peace and order, according to Solda.

(Any activities in the facility were temporarily suspended as BJMP conducts a deeper investigation in the incident.)