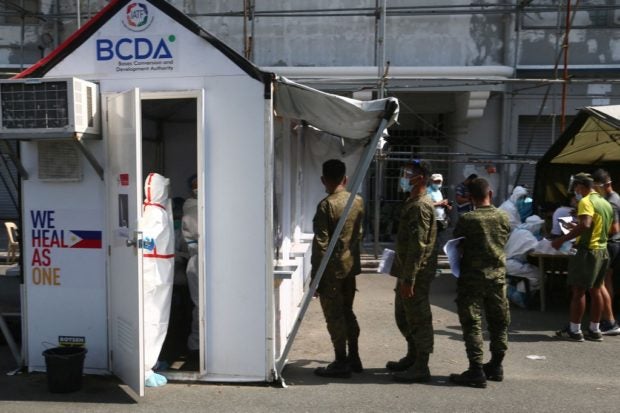 Military personnel queue up for coronavirus swab tests outside a gymnasium in Manila on Jan. 7, 2022, as infections driven by the Omicron variant have tripled in the last two days in the nation’s capital. (Photo by Agence France-Presse)

MANILA, Philippines — For the third straight day, the number of new COVID-19 cases in the country broke records after the Department of Health (DOH) on Monday reported 33,169 infections, the highest daily tally since the pandemic started two years ago.

The positivity rate was at 46 percent based on the 73,234 people who were tested on Saturday, the DOH said. This did not include figures from 10 laboratories that failed to submit their data to the COVID-19 Document Repository System.

The DOH said 18,535 or 56 percent of the new infections were in Metro Manila. Calabarzon (Cavite, Laguna, Batangas, Rizal and Quezon) and Central Luzon also reported big numbers of new cases.

The country’s total caseload since the pandemic began was now 2,998,530.

“The positivity rate in the NCR is 50.5 percent as of Jan. 7, 2022, the first time it exceeded 50 percent in the NCR,” OCTA Research fellow Dr. Guido David said in a post on Twitter.

While he noted that this was too high, he said data from the DOH showed that the rate of increase could be slowing down.

“If the increase in positivity rate is slowing down, then the peak in the NCR might occur within the week. Let us hope that is the case,” he said.

With the increase in infections, calls received by the One Hospital Command Center have also spiked to more than a thousand a day, according to the center’s operations manager, Dr. Bernadette Velasco.

Launched in August 2020, the One Hospital Command Center is mandated to facilitate a comprehensive and coordinated response to the pandemic by ensuring effective and efficient health facility referral in Metro Manila and nearby areas.

Velasco said that in December last year, the country’s COVID-19 referral hotline received an average of 150 to 200 calls a day. 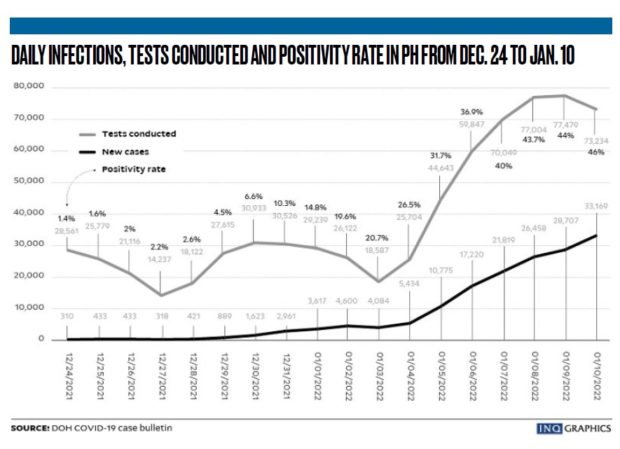 “Since the start of the year, we saw a sudden increase in cases. We now receive more than 1,000 calls a day,” she said in a radio interview.

But Velasco said most of the calls, unlike during the height of the previous surge, were from mild and asymptomatic patients.

The surge in COVID-19 cases this year has filled many hospitals especially around Metro Manila.

The Philippine General Hospital (PGH) has decided to temporarily close its outpatient department for walk-in consultations and unscheduled face-to-face visits as the number of health-care workers infected with COVID-19 in the facility continued to rise.

At the Laging Handa briefing, special adviser of the National Task Force Against COVID-19 Ted Herbosa said that more than 500 doctors, nurses and medical technologists of PGH had tested positive for COVID-19.

He said the COVID-19 wards in NCR were now 65-percent occupied.

Ospital ng Muntinlupa has also reached its maximum capacity on Sunday, according to the city’s public information office.

In the City of Manila, the six district hospitals reached more than half of their bed capacity for COVID-19 cases.

Fortunately, all of the health-care workers were vaccinated and thus exhibited only mild to moderate symptoms, according to the spokespersons of East Avenue Medical Center in Quezon City and Jose N. Rodriguez Memorial Hospital and Sanitarium (Tala Hospital) in Caloocan City.

“[This] will pose further danger to the health and safety of health workers as well as the patients. This will also further accelerate the proliferation and spread of infection,” the Alliance of Health Workers (AHW) said in a statement.

The group said the new policy was “inhumane and unjust” to health workers who risk their lives battling the infectious and deadly coronavirus.

The group stressed that health workers with high-risk exposure to COVID-19, with or without symptoms, should be quarantined and undergo free, regular and mandatory reverse transcription-polymerase chain reaction (RT-PCR) test.

AHW called on the government to implement a mass hiring of regular health workers with living wage, stressing that the solution to sustaining the country’s health-care capacity was by preventing public hospitals from getting overwhelmed.

The Filipino Nurses United also criticized the new policy on quarantine and isolation for health-care workers, stressing that it compromised their own health and safety.

Read Next
Metro Manila mayors see no need yet to raise alert level despite COVID-19 surge
EDITORS' PICK
Metro Manila’s COVID-19 cases on downward trend, but surge not over — OCTA
House energy committee chair Arroyo bats for cheap electricity
Unleash the photographer in you this World Photography Day with vivo smartphones
Palace warns sugar hoarders after raid on Pampanga warehouse
Look Through: The fate of impounded stray dogs
What to watch out for when selecting a video surveillance solution
MOST READ
Palace warns sugar hoarders after raid on Pampanga warehouse
LOOK: Miel Pangilinan dazzles in glittery pre-debut shoot
Indigent students to get one-time cash aid from DSWD
Vice Ganda dismisses rumors he broke up with Ion Perez: ‘Masaya kami’
Don't miss out on the latest news and information.