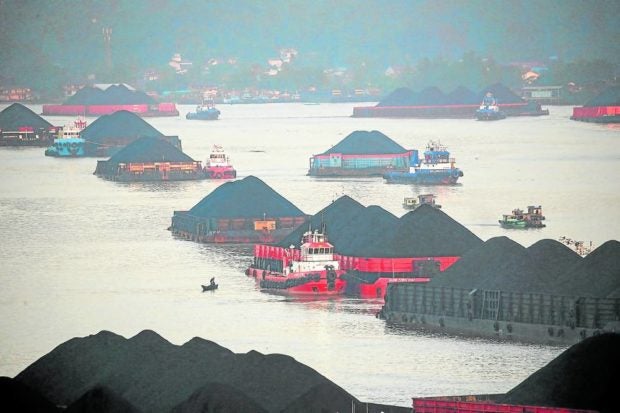 COAL PORT Coal barges queue to be pulled along Mahakam river in Samarinda, East Kalimantan province, Indonesia, in this photo taken in 2019. —REUTERS

The government has appealed to Indonesia to lift its coal export ban, saying the policy would be detrimental to economies heavily reliant on the fuel for power generation such as the Philippines.

Cusi had asked the foreign affairs department to intercede and appeal on behalf of the Philippines through the Association of Southeast Asian Nations (Asean) cooperation mechanism.

The export ban already drove coal prices in China and Australia higher last week, while a number of vessels slated to carry coal to major buyers such as Japan, China, South Korea and India have been in limbo off Kalimantan, home to Indonesia’s main coal ports.

The Philippines, which is still heavily dependent on coal for power generation, buys most of its requirements from Indonesia, and some, more expensive coal from Australia and Vietnam.

Nearly 70 percent of the 42.5 million tons of Philippine coal supply in 2020 was imported, according to government data.

Power generated by coal accounted for about 60 percent of the country’s power mix, and in 2021 the country imported 2.3 million tons a month from Indonesia to fuel its power plants, the DOE said.

Sen. Sherwin Gatchalian, who heads the Senate energy committee, has called on the DOE to prepare contingency measures because of the export ban, including looking for other potential suppliers.

Energy Undersecretary and spokesperson Felix William Fuentebella said the DOE was scheduled to discuss the matter on Tuesday.

He said concerned bureaus were also asked to find ways to maximize the country’s own fuel supply, including renewables and biomass, aside from the possibility of the government diversifying its coal sources.

Power distribution giant Manila Electric Co. (Meralco) said the move of the Indonesian government to suspend its coal exports to avert a looming power crisis might not affect the Philippines just yet.

Joe Zaldarriaga, vice president of Meralco, said their suppliers have assured them that “at least in the coming couple of months, there will be no supply disruption.”

He said the country could also import coal from Australia and other countries.

Consumer rights and energy advocacy group Power4People Coalition (P4P) also raised concerns over the country’s power stability given that the Philippines imports 97 percent of its coal supply from Indonesia.

“As we wait for the implications of Indonesia’s export ban to be reflected on our monthly bills just like last year’s energy crunch did, we can already be sure that more of such will happen in the future for as long as we insist on using fossil fuels even as our country’s vast indigenous renewable energy capacity waits to be harnessed,” said P4P convener Gerry Arances.

“We need to get off reliance on global fossil fuel supply—coal or otherwise fast. We have repeatedly told DOE this, and we hope Indonesia’s predicament is now making the message clear. We must begin by putting a stop to any new coal plant still in our pipeline,” he added.