In highly vaccinated Korea, mandates are fueling a backlash 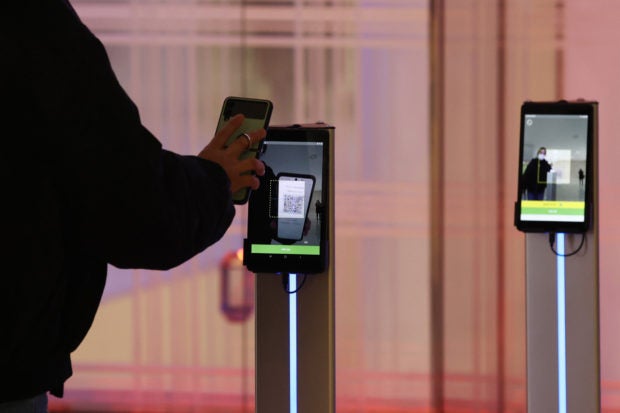 QR code scanners are set up at the entrance of a mall in Seoul. Visitors must scan their personal QR code generated through a smartphone app before entering. Yonhap via The Korea Herald/Asia News Network

SEOUL — Korea’s new policy requiring people to be completely vaccinated or cleared in tests to enter public places is stirring up a wave of protests and court challenges.

On Saturday civic groups and local community organizations marched from Seoul Station to Gwanghwamun Square demanding that the compulsory vaccine-or-testing policy be scrapped. The Saturday rally, among the firsts of many that is being planned, follows a series of legal battles facing the government over the mandate, with one reaching the Constitutional Court last month.

Last week, a Seoul court temporarily blocked the use of vaccine passes at educational facilities, citing potential infringements of constitutional rights to education and other freedoms. This marks the first time in the past two years that the judiciary has put a brake on the government’s COVID-19 rules.

In other places, including cafes, restaurants and libraries, the mandate remains in full force while they await a verdict from the court, expected to be given in two to three weeks.

Starting Monday, large malls and grocery stores will require people to provide proof of being fully vaccinated within the last six months or a negative PCR test result that is less than 48 hours old. For the first “trial” week no penalties will be imposed on those that fail to comply. After that, first-time offenders can face a fine of up to 1.5 million won ($1,263) and other administrative penalties.

During the first court showdown on Friday in a Seoul administrative court, the judges questioned the validity of extending the pass system to low-risk, essential places while health officials maintained it was necessary to control the pandemic.

Asked what public good the passes achieved, Son Young-rae, the Ministry of Health and Welfare spokesperson, appearing as a defendant, told the judges that vaccine passes would provide relief to struggling intensive care rooms at hospitals.

“The spirit of the COVID-19 pass is to shield the unvaccinated and keep hospitals from breaking,” he said. He said unvaccinated adults — just 6 percent of the entire adult population — were making up about a third of all cases, and more than half of all hospital admissions and deaths.

Son said vaccine passes were “more efficient at controlling COVID-19 than social distancing.” Since the passes were introduced in early December, cases have started to fall, he said.

“If the controversy stops the passes from being used in more places, it will take us longer to contain the surge, which means that we will have to keep restrictive measures in place for that much longer,” he said.

Health experts both within or working with the government say they have qualms about courts having the ultimate say in COVID-19 response measures.

Dr. Lee Jacob, infectious disease specialist who is on the advisory panel providing advice to the government on its return to normal strategy, said, “The court now has the final authority on COVID-19 policies. Any policy met by similar public protests will be subject to review by the court.”

Dr. Jung Jae-hun, a COVID-19 adviser to the prime minister, said although the court’s decision should be respected, some of its reasoning “lacked scientific, medical understanding.”

For one thing, the court was “evidently wrong to say that the unvaccinated are ‘not at a significantly higher risk of spreading COVID-19’ than the vaccinated,” he said.

Other health experts say the expansive mandates are doing more harm than good.

Infectious disease professor Dr. Kim Woo-joo of Korea University worried that the enforcement of sweeping mandates is producing a “rise of more vocal vaccine naysayers.” He said the controversy surrounding the mandates was “emboldening vaccine skeptics into discrediting the vaccination campaign.”

To counter hesitancy, the government should engage in a transparent and responsible risk communication, he said.

On Son’s claims that the surge has stabilized since the implementation of the pass policy, Kim said, “It’s not accurate to attribute the slowdown in infections in the last few weeks to vaccine passes. Over the period, booster vaccination rates in older adults have gone up and more intensive social distancing was reinstituted.”

Dr. Paik Soon-young, an emeritus professor of microbiology at Catholic University of Korea’s College of Medicine, agreed that, “Koreans have responded with an incredible enthusiasm to the vaccine campaign. Blaming the unvaccinated for crowding hospitals will only end up dividing the country.”

He said, “Mandates of similar nature have been adopted elsewhere in the world with an aim of encouraging people to get the shot. On the other hand, as far as adult vaccinations go, Korea is as vaccinated as it can be. So why fix something that isn’t broken?”

Barring unvaccinated people from visiting grocery stores, shopping centers and other common places where face masks can be worn is “minimally helpful” in stemming the spread, he said. “Most dangerous places are where people take masks off and dine together.”

He went on, “In the early days, Korea used to pride itself on getting the pandemic under control without sacrificing personal freedoms. But with the latest mandate, I worry that we’re straying farther from that direction.”