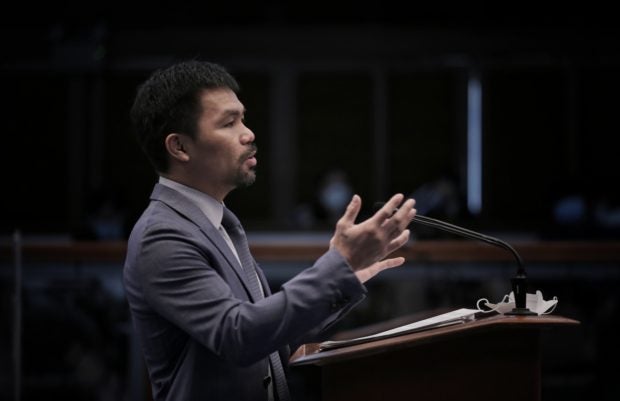 MANILA, Philippines — Senator Manny Pacquiao has expressed alarm over the massive exodus of Filipino health workers due to alleged miserable working conditions and demoralizing salaries and raised the need for the government to intervene by increasing the minimum wage of all medical professionals – both in the public and private sectors.

According to him,  the global health crisis caused by COVID-19 could only slow down but would not easily go away and this would mean greater overseas demand for Filipino medical professionals.

Pacquiao said that last year alone, at least 10,000 health professionals left the country to work elsewhere while the country’s government and private hospitals were severely understaffed.

Pacquiao insisted that nurses, medical technologists, pharmacists, and other health professionals should have a minimum salary of P50,000 on top of other perks such as the Special Risk Allowance (SRA). He noted that although this amount is barely enough to compensate for their sacrifices, this is already within the acceptable income standard of P42,000 per month as declared by the National Economic Development Authority (NEDA).

Pacquiao said the P13,000 per month minimum wage for private nurses and P19,000 for government nurses is very degrading especially since health workers are the nation’s most important resource in this time of a pandemic.

“This P50,000 per month minimum wage is still very low if we compare it with the salaries offered by other countries but it might be enough to convince some of them not to leave their families behind. Maraming mga pamilya ang nawawasak at maraming mag kababataan ang naliligaw ng landas dahil sa hiwa-hiwalay na pamilya,” Pacquiao said.

Pacquiao said that he is elected president, he would immediately ask Congress to legislate a new salary standardization scheme for health workers which would allow them to have a minimum take-home pay of P50,000 per month.

He said he would also order the National Wages and Productivity Commission (NWPC) and the Regional Tripartite Wages and Productivity Boards (RTWPBs) to revamp the current minimum wage for private health professionals and increase their gross monthly pay to a minimum of P50,000 per month. This amount would be increased progressively over a certain period to make their salaries competitive with those offered overseas.

For health professionals working in government hospitals and other medical facilities, Pacquiao said their salary increase would be sourced from the estimated P700 billion to P1 trillion savings from eradicating corruption in government. On the other hand, private hospitals and medical facilities can be given tax incentives or even subsidies if the NWPC determines that they cannot afford to fully shoulder the wage increase for their personnel.

“Make no mistake: public funds are available to improve their salaries. We will review current budget priorities to make this happen, and we will ensure improved revenue collection anchored on solid economic growth. In other words, we are ready to trim the fat in government expenditures for the benefit of our frontliners and their families,” Pacquiao stressed.

The presidential aspirant said improving sector salaries is not without precedent, as the current administration has vastly improved the salaries of uniformed personnel over the course of its term.