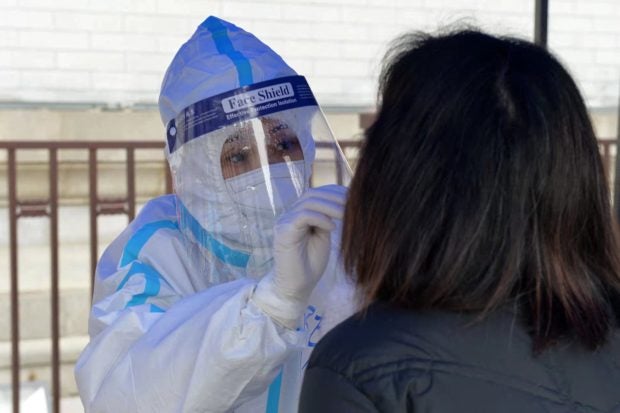 A health worker gets a swab sample from a resident to test for Covid-19 coronavirus in Tianjin, in northern China on January 9, 2022. (Photo by STRINGER / AFP)

BEIJING — China reported more cases of the highly transmissible Omicron coronavirus variant on Monday, with authorities on high alert over flare-ups in major cities just weeks ahead of the Beijing Winter Olympics.

The emergence of the fast-spreading variant is yet another test of China’s zero Covid strategy, with authorities already battling several outbreaks — including in Xi’an where 13 million city residents were in their third week of lockdown.

Fears grew about a cluster of infections in the northern city of Tianjin, which was linked to two Omicron cases reported Monday in the city of Anyang around 400 kilometers (250 miles) away.

“The general public should not leave Tianjin unless essential to do so,” city officials said in a statement Sunday.

Those who need to leave must obtain official permission and test negative for the virus within 48 hours of their departure, it added.

Schools and university campuses have been closed, and trains into Beijing from Tianjin have been cancelled.

Road checkpoints have been set up for vehicles entering the capital.

Tianjin — just 150 kilometers from Beijing — has already ordered the testing of all 14 million residents.

Another 21 cases were reported in the city Monday, although the strain of virus wasn’t confirmed.

Gu Qing, director of the Tianjin Municipal Health Commission, told reporters at the weekend that the new cases are “mainly students and their parents who go to the same nursery and school.”

The world’s most populous nation — where the coronavirus was first detected in late 2019 — slowed the spread of the virus to a trickle through its zero Covid strategy, which includes targeted lockdowns, border restrictions and lengthy quarantines.

While China’s total reported cases are far lower than other virus hotspots such as the United States and Europe, there is widespread concern about the impact of Omicron.

Authorities in the city of Anyang in central Henan province also announced the testing of all residents — more than five million people — over the weekend.

The city on Monday reported two Omicron cases linked to the Tianjin cluster.

Henan reported 60 new cases Monday but did not break down the tally by variant. The provincial capital Zhengzhou has closed schools and kindergartens, and stopped restaurants from accepting dine-in customers.

Before the latest cluster, China had reported just a handful of Omicron cases, all linked to imported infections.

Authorities are especially wary of major outbreaks ahead of the Winter Olympics, which Beijing will host from February 4-20.

The global event will coincide with the busy Lunar New Year holidays over which millions of people travel across the country.