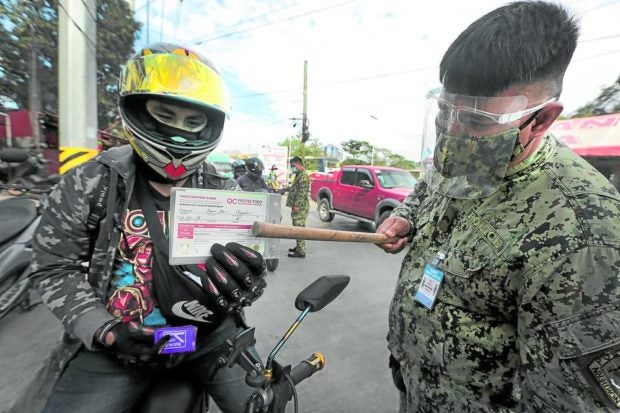 CHECKPOINTS AGAIN A motorist presents his vaccination card to a policeman at a checkpoint in Quezon City. —GRIG C. MONTEGRANDE

MANILA, Philippines — The Commission on Human Rights (CHR) questioned on Saturday the legality of arresting unvaccinated individuals after President Rodrigo Duterte ordered barangay officials to restrain the movement of the unvaxxed.

“While the 1987 Constitution provides that liberty of movement can be restricted in the interest of national security, public safety or public health, it still requires a law to make the said restriction legal,” Jacqueline de Guia, spokesperson for the CHR, argued in a statement.

De Guia issued the statement as quarantine-weary people in democratic countries around the world began to question whether it was even lawful to restrict the movement of people amid a raging global pandemic.

In the United States, the Biden administration is set to implement on Monday a new policy requiring the vaccination of workers and frequent testing.

On Friday, the US Supreme Court heard more than three and a half hours of arguments in two cases that test presidential powers to combat a raging public health crisis that has already killed millions all over the world.

In Metro Manila and several areas, a resurgence of COVID-19 cases prompted the government to activate the restrictive alert level 3 in a bid to cope with increasing hospitalizations.

Bayan Muna chair and Makabayan senatorial aspirant Neri Colmenares questioned the President’s order, saying it was not illegal to be unvaccinated and the law the administration had been citing only covered those who are already infected.

Arrest only a last resort

“I cannot understand where the President gets all these ideas … If he wants people to get vaccinated, he should ensure an adequate supply of vaccines all over the country to ensure everyone’s safety,” he said.

But the Department of the Interior and Local Government clarified the President’s order and said barangay personnel would only arrest hard-headed unvaccinated individuals as a last resort.

“The President is merely exercising his authority as Chief Executive under the public health emergency. He was very clear in his directive that an arrest will only be a last resort,” Interior Secretary Eduardo Año said in a statement on Saturday.

“They would be first asked to go back and stay at their homes. Barangay officials may only arrest the unvaccinated individual who refuse to cooperate and who are leaving their homes for nonessential purposes,” he added.