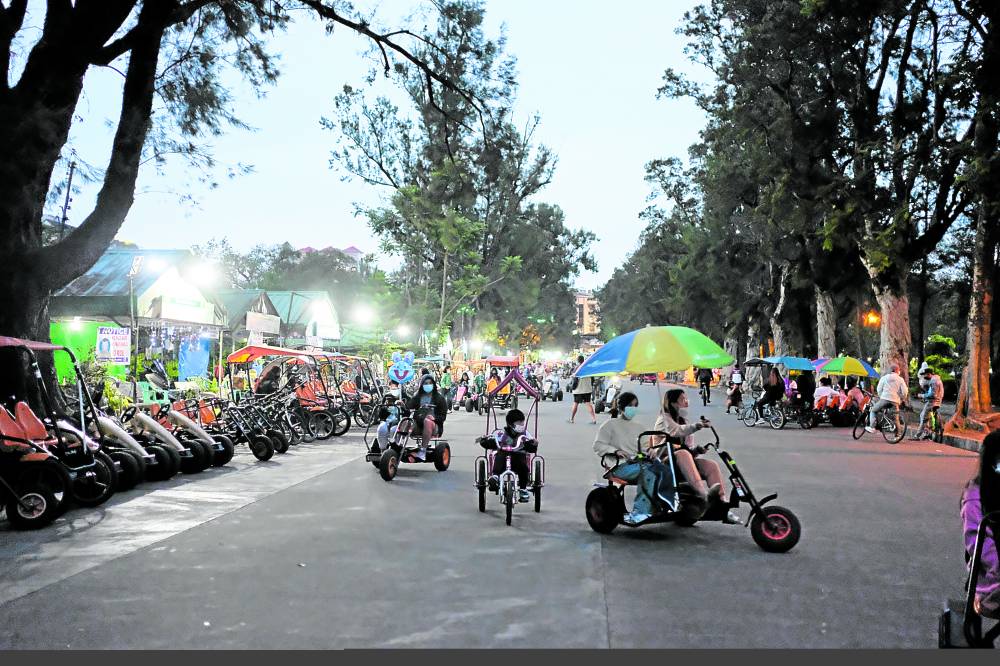 BAGUIO CITY—More localities across the country are making it difficult for unvaccinated persons to enter their borders or even go around public places and malls in their own communities.

In Luzon, this policy was instituted by at least nine cities and provinces in central and northern regions, including Baguio City, which have been placed under alert level 3 until Jan. 15 due to rising COVID-19 cases, and of many other areas in Calabarzon and Bicol regions.

Vaccinated individuals, who used to have free egress to these cities and provinces, are now required to present negative reverse transcription-polymerase chain reaction (RT-PCR) or antigen test result, similar to what Baguio has begun imposing on Wednesday.

At least two cities in Luzon—Tarlac and Lucena (Quezon)—and three in the Visayas—Iloilo, Ormoc (Leyte) and Cadiz (Negros Occidental)—and a town in Leyte went further by barring their own unvaccinated residents from getting into government offices and business establishments.

The cities of Baguio, Dagupan, Santiago, Angeles, Olongapo and Lucena, and the provinces of Cagayan, Pampanga, Zambales and Bataan were placed under alert level 3 from Jan. 9 to Jan. 15.

Like Baguio, Dagupan also closed its borders to unvaccinated persons from other areas, except for emergency and humanitarian reasons, as part of the heightened alert status.

Dagupan has 45 active COVID-19 cases as of Thursday and at least 19 of these were recorded that day.

In Baguio, the medical community was preparing for a surge of infections after it determined that visitors, who took part in holiday gatherings and reunions, dominated the 287 active COVID-19 cases being treated in the city as of Wednesday. The city only had four active cases on Christmas Day.

Dr. Donnabel Tubera Panes, the city epidemiologist, said the city health services office and Baguio hospitals have reinstated surveillance and COVID-19 response protocols that were used to manage a wave of infections in September last year. But medical workers were banking on the high vaccination performance of Baguio, which has fully vaccinated 260,190 (92.59 percent) of its 281,000 eligible population, and had administered booster shots to 37,170 people as of Thursday.

Infections have also increased in the highland provinces after the holidays, with 447 active cases recorded for the whole Cordillera region on the Wednesday. Among the new cases were 18 student nurses from a Baguio university who were among a 165-man delegation due to undertake clinical duties at a hospital there in Bauko town, Mountain Province.

An investigation was underway to establish how and where the students caught the virus, given they were all fully vaccinated, and exit and entry protocols in Baguio and Bauko require negative test results, said Karen Lonogan, a member of the Department of Health-Cordillera epidemiology unit.

In Bulacan, unvaccinated persons would be refused entry at the 24 police border control points it set up at its boundary with Metro Manila and the provinces of Pampanga and Nueva Ecija.

Bulacan police director Col. Manuel Lukban Jr. said only the residents providing essential services and other authorized personnel who could present vaccination cards would be allowed to enter and exit the province’s borders.

In Pampanga, Gov. Dennis Pineda ordered the reactivation of COVID-19 quarantine and isolation facilities in the towns of Mexico and Lubao in anticipation of another wave of infections.

As of Thursday, the number of active COVID-19 cases in Pampanga rose to 597 after logging 266 new cases on that day.

In Ilocos Sur, the provincial government brought back strict border protocols, which included mandatory quarantine and testing, beginning on Jan. 10.

“It is imperative that the provincial government act quickly to shield its people from another surge,” said Gov. Ryan Luis Singson, in an executive order issued on Friday.

The province would not stop the entry of the unvaccinated individuals from areas under alert level 2 but would bar those from places under alert levels 4 and 3. All vaccinated persons would also need to present negative results of either RT-PCR or antigen test.

All travelers have to go on quarantine upon entry, regardless of vaccination status. The vaccinated entrants would undergo a seven-day home quarantine while the partially vaccinated or unvaccinated travelers would go through a 14-day quarantine period in a local government-designated facility.

In Lucena City, Mayor Roderick Alcala said he had ordered all business establishments in Lucena to bar unvaccinated individuals from entering their premises.

The city has recorded 36 new COVID-19 cases as of Thursday from only one case on Dec. 20 last year.

In Bicol, the region’s COVID-19 task force has asked local governments to limit the movement of unvaccinated persons in their localities.

“Although we do not want to implement this, it is important to protect everyone, especially if it is true that this variant (Omicron) is more dangerous to those who have not received doses,” said lawyer Anthony Nuyda, the task force head and regional director of the Department of the Interior and Local Government.

In the Bicol Region, only 53 percent of the population has received full doses of their vaccines. The region has also seen a spike in new cases, totaling 275 as of Thursday, but zero new infection on Christmas Day.

In Ormoc City, Mayor Richard Gomez on Wednesday ordered all business and private establishments in the city to no longer accept unvaccinated individuals. Mass gatherings, including in residences, were also prohibited across the city except for a wake; and an 11 p.m.-3 a.m. curfew was imposed on Thursday. In Iloilo City, only persons who have completed their COVID-19 booster shot will be allowed to transact at the City Hall.

City employees who have been fully vaccinated as of September last year were also required to get their COVID-19 booster shots before Jan. 17 or they would also be barred from entering the City Hall building.

“In the wake of the Omicron variant and the infections that the United States, Europe and even Australia are showing, we need to ramp up vaccination and booster shots to give adequate protection to everyone. We will require booster shots for employees and clients (of the) City Hall,” Iloilo City Mayor Jerry Treñas said in a statement on Friday.

Treñas added that he was finalizing the executive order that would “prohibit the unvaccinated from entering the malls, movie houses, restaurants, government offices and the like.”

In Cadiz City, Mayor Salvador Escalante made vaccination a requirement for all public transport drivers and operators, and for city employees in public markets and city-owned buildings or facilities.

Escalante said passenger buses driven by unvaccinated persons and those without valid negative test results would be prevented from entering Cadiz City.

In the town of Albuera, Mayor Sixto de la Victoria mandated business establishments to ask for vaccination cards from their clients.