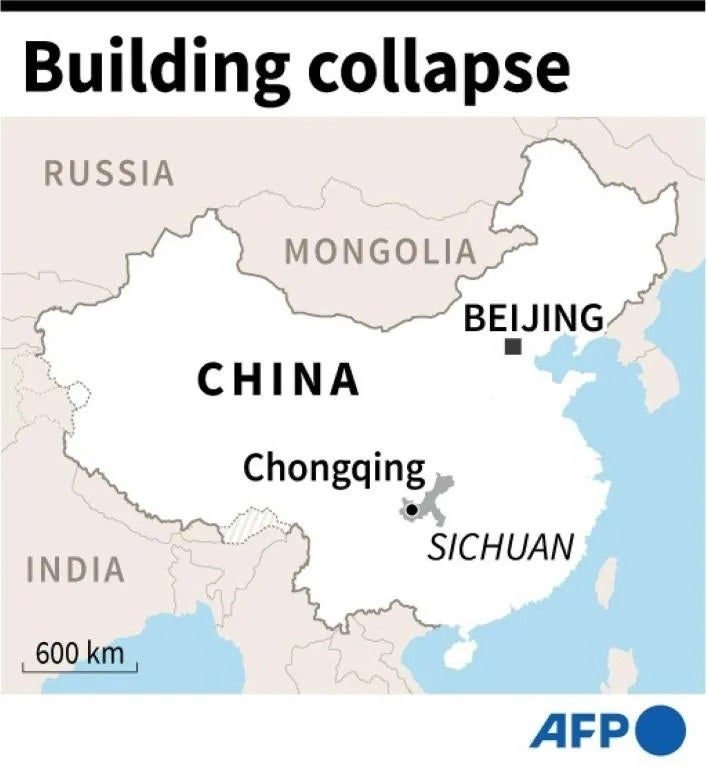 Beijing, China — At least six people died when an explosion caused a building to collapse Friday in the Chinese city of Chongqing, state media reported.

The blast at 12:10 p.m. (0410 GMT) was triggered by a suspected gas leak and brought down a neighborhood committee building housing a canteen, trapping more than 20 people, state news agency Xinhua said.

As of 7 p.m., 15 people had been pulled from the rubble, six of whom had lost their lives.

Rescuers are attempting to free another 11 people trapped in the rubble, Xinhua said.

Rescue efforts continued Friday night, with videos and photos from Xinhua showing orange-clad workers in hard hats climbing through the rubble under floodlights.

Some of the injured people have been taken to hospital for treatment, Xinhua reported, without giving further details of their condition.

Footage posted by state broadcaster CCTV on social media showed smoke and dust billowing from the collapsed building in Wulong district on the outskirts of the southwestern megacity.

The scene of the blast appeared to be in the middle of other buildings and was surrounded by a crowd of bystanders.

Another clip by Xinhua showed dozens of rescuers in military fatigues jogging along a road to the site carrying shovels over their shoulders.

More than 150 fire and rescue workers have been deployed to the site, CCTV said.

Heavy lifting and excavation equipment have also been sent to the scene.

The cause of the blast remains under investigation.

An eyewitness told state-run Phoenix TV that the blast was “very scary… our windows have all been blown to pieces”.

Officials have demanded the “fastest possible rescue” and ordered service personnel to “spare no effort to rescue the injured and strictly guard against secondary disasters”, the newspaper said.

Gas leaks and explosions are not uncommon in China, due to weak safety standards and corruption among officials tasked with enforcement.

In June, 25 people were killed in a gas blast that ripped through a residential compound and struck a busy two-storey building packed with shoppers.

Eight suspects, including the general manager of the company that owned the gas pipe, were detained after the government said “the company’s safety management system was unsound”.

The same month, 18 people were killed and more injured when a fire broke out at a martial arts school, with state media reporting that all the victims were boarding school pupils.