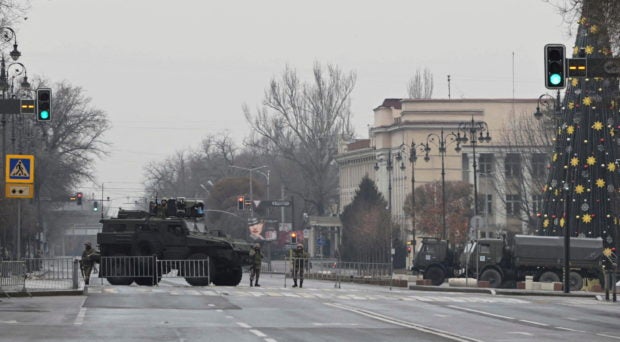 ALMATY — Kazakhstan’s President Kassym-Jomart Tokayev said Friday that he had given shoot-to-kill orders to deal with further disturbances from those he called bandits and terrorists, adding that those who failed to surrender would be “destroyed.”

Up to 20,000 “bandits” had attacked the biggest city Almaty and had been destroying state property, Tokayev said in a televised address after a week when protests over fuel prices exploded into a countrywide wave of unrest.

He said as part of the “counter-terrorist” operation, he had ordered law enforcement agencies and the army “to shoot to kill without warning.”

“The militants have not laid down their arms, they continue to commit crimes or are preparing for them. The fight against them must be pursued to the end. Whoever does not surrender will be destroyed,” Tokayev said on state television.

He dismissed calls to hold talks with protesters.

“What stupidity. What kind of talks can we hold with criminals and murderers?” he said.

“We had to deal with armed and well-prepared bandits, local as well as foreign. More precisely, with terrorists. So we have to destroy them, this will be done soon”.

Tokayev thanked Russian President Vladimir Putin and the leaders of China, Uzbekistan, and Turkey for their assistance.

He said peacekeeping forces sent from Russia and neighboring states had arrived at Kazakhstan’s request and were in the country on a temporary basis to ensure security.

It was critically important to understand why the state had “slept through the underground preparation of terrorist attacks, of militant sleeper cells,” Tokayev added.