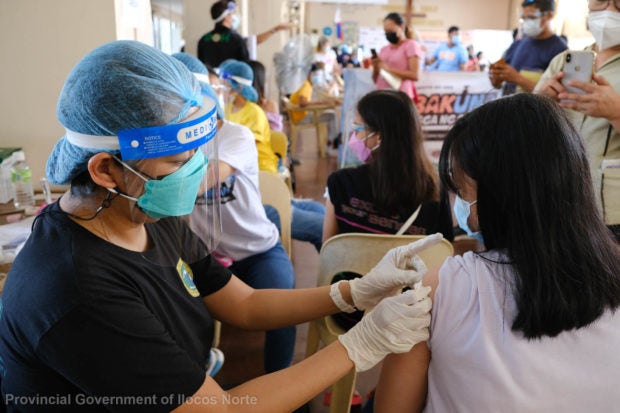 MANILA, Philippines — President Rodrigo Duterte’s order to “restrain” unvaccinated individuals from going out of their houses is applicable nationwide regardless of an area’s alert level status, Malacanang said Friday.

(It appears that based on the President’s declaration, pronouncement, and directive, it appears that the order is applicable nationwide and regardless of the alert level.)

(His instructions to barangay chiefs is to appeal to those unvaccinated not to go outside their homes unless it’s not essential or not for work purposes.)

Nograles said the chief executive’s order is meant to ensure the safety and protection of those who remain unvaccinated as well as the rest of the population.

(So we can curb the spread of the virus, to protect those unvaccinated because we can see from the data that if one is unvaccinated and gets COVID, their condition turns severe and critical.)

In a Talk to the People address aired late Thursday, Duterte directed barangay captains to identify unvaccinated people in their communities and restrain them from going out of their residences.

Duterte had reasoned that as President, he is responsible for the health of Filipinos, thus, he has come to the decision to restrain the movement of unvaccinated people.

However, he noted that those who are unvaccinated need not be arrested immediately and can be requested to stay home.

The Philippines on Thursday logged 17,220 new COVID-19 cases, the highest in over three months and a new record high 36.9 percent positivity rate.

At present, Metro Manila, Bulacan, Cavite, Rizal, and Laguna are under Alert Level 3 until Jan. 15. Meanwhile, 14 more areas will be put under the same alert level starting Jan. 9.