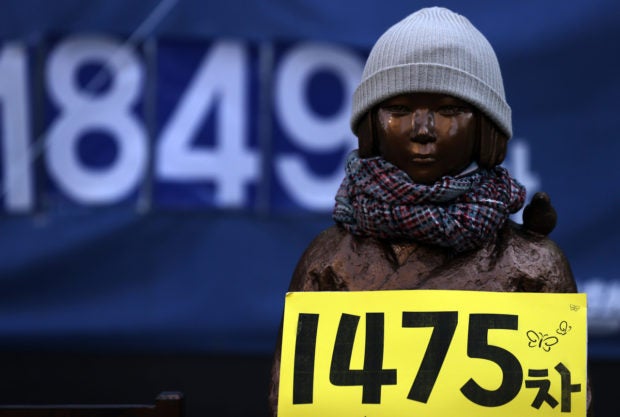 A statue of a girl symbolizing “comfort women” in Seoul. (Yonhap)

SEOUL — A Harvard professor whose earlier claim that victims of Japan’s wartime sexual slavery were voluntary prostitutes stirred great fury is expected to draw further criticism with his renewed assertion that denies contemporary evidence to back the existence of the euphemistically labeled “comfort women.”

The South Korean government, as well as experts here, rebuffed his argument, saying Japan’s sexual enslavement is a historical fact that has already been “proven universally.”

Mark Ramseyer, a Mitsubishi professor of Japanese legal studies at Harvard Law School, made the assertion in a new paper released Tuesday on the law school’s website. The article was written as a response to critics of the earlier paper, “Contracting for sex in the Pacific War,” which upon release last year prompted outcry from among the public, politicians and scholars in both South Korea and the US for misrepresentation.

In his response, Ramseyer stated that the claim that large numbers of Korean women were forcibly conscripted at gunpoint or hauled away against their will by the Japanese Army is false.

“Korean women were not programmatically and forcibly conscripted by Japanese soldiers in Korea into comfort station work,” Ramseyer said. “There is no contemporaneous documentary evidence of forcible conscription.”

Ramseyer said there was no corroboration during the colonial period and up to three decades after World War II ended in 1945, including in newspapers or police reports that the Japanese military kidnapped young South Korean women and girls for sexual slavery.

He added that it was only after the controversial 1983 book “My War Crimes” by Japanese writer Seiji Yoshida was published that South Korean comfort women began to come forward publicly, demanding compensation from Japan for its atrocities.

“Korean comfort women only began to claim that they had been dragooned by the Japanese military after Yoshida published his 1983 book, in which he recounted leading a military squad on ‘comfort women hunts’ in Korea,” he said, noting Yoshida later claimed he had fabricated the entire book.

The 1996 UN human rights report is one of a number of notable documents that recognized the existence of comfort women and concluded they had been “military sex slaves.” But Japan has contested that finding, and has been calling for a revision, which has been denied.

Ramseyer also questioned the credibility of the testimonies of comfort women, saying their late-in-life testimonies sometimes had contradicted earlier accounts.

A Foreign Ministry official said Ramseyer’s claims are “nothing new” and not worthy of a response.

“The comfort women issue is an unprecedented violation of human rights on women in armed conflict as well as a violation of universal human rights,” the official said, reiterating the government’s position. “Unlike Ramseyer’s claim, (the comfort women) issue is a historical fact that has been universally proven through numerous accounts of the victims’ testimony and international organization’s probes.”

Experts also argued that Ramseyer’s argument is outdated and flawed, and questioned his motive of releasing an article when tensions over the issue run high between South Korea and Japan.

Yuji Hosaka, a political science professor at Sejong University, said that there are many other pieces of evidence, including testimonies and overseas documents, proving Japan’s atrocities, and Ramseyer is deceiving the public by failing to tell the full story by not taking all the evidence into account.

“There are documents from the 1940s that backed the enforced nature of the recruitment,” said Hosaka. “The testimonies of comfort women also match with these documents.”

Hosaka says Ramseyer, who was raised in Japan, has ties to Japanese right-wing, nationalist groups.

“At a time when the weekly rally demanding Japan’s apology to comfort women marked its 30th anniversary yesterday, the timing of his statement is questionable,” said Hosaka. “His claims could be used by nationalists and Japan’s right-wing groups to downplay the existence of comfort women.”