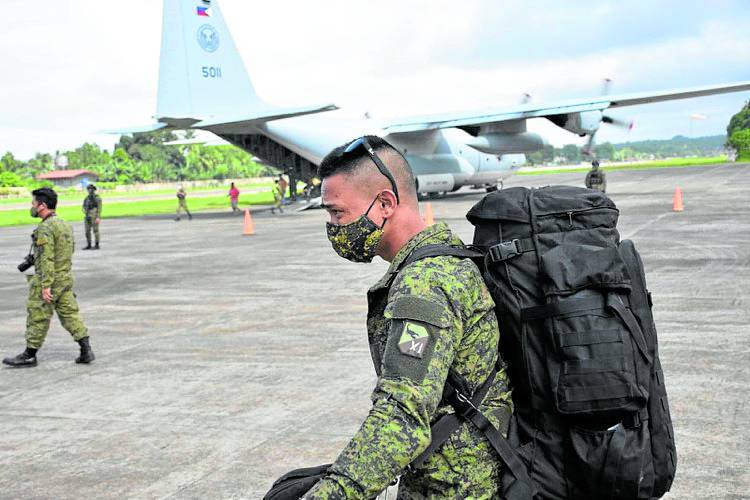 HOMEWARD BOUND For the first time since the ill-fated C-130 crash in July, a newly acquired C-130 military craft from Portugal landed at Jolo Airport in Sulu on Friday to transport more than 60 personnel to Manila, from where they will head home for the Christmas break. —PHOTO COURTESY OF THE ARMED FORCES OF THE PHILIPPINES WESTERN MINDANAO COMMAND

The report said members of the 1001st Infantry Brigade clashed with the group of Menando Villanueva, secretary of the NPA’s Southern Mindanao Regional Committee, resulting in Villanueva’s death in the area.

The report also identified Villanueva as the secretary of Komisyong Mindanao, commanding officer of the NPA’s National Operations Command, and a member of the politburo of the Communist Party of the Philippines (CPP) central committee.

Villanueva’s killing came about a week after the military identified him and Eric Casilao, another leader of the revolutionary movement, as the military’s next targets after the death on Oct. 30 of Jorge Madlos, also known as Ka Oris, the spokesperson of the National Democratic Front-Mindanao.

Pictures of Villanueva and Casilao were circulated earlier so that the government could track them down.