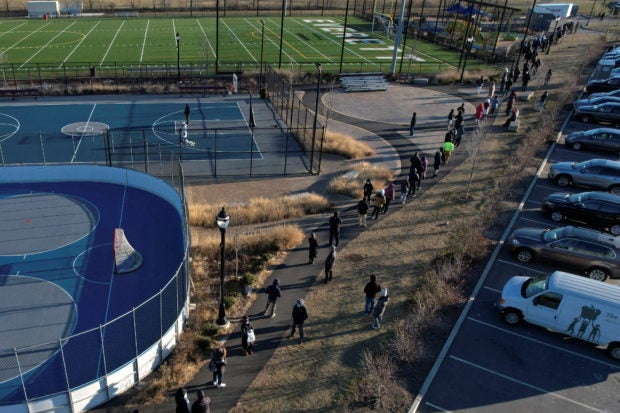 People line up in cold winter temperatures to be tested for the coronavirus disease (COVID-19) in Everett, Massachusetts, U.S., January 4, 2022. Picture taken with a drone. REUTERS/Brian Snyder

The United States set a global record of almost 1 million new coronavirus infections reported on Monday, according to a Reuters tally, nearly double the country’s peak hit just a week ago as the highly contagious Omicron variant shows no sign of slowing.

The number of hospitalized COVID-19 patients has risen nearly 50% in the last week and now exceeds 100,000, a Reuters analysis showed, the first time that threshold has been reached since the winter surge a year ago.

Overall, the United States has seen a daily average of 486,000 cases over the last week, a rate that has doubled in seven days and far outstrips that of any other country. The 978,856 new infections on Monday includes some cases from Saturday and Sunday, when many states do not report.

The average number of U.S. COVID-19 deaths per day has remained fairly steady throughout December and into early January at about 1,300, according to a Reuters tally, though deaths typically lag behind cases and hospitalizations.

Omicron appears to be far more easily transmitted than previous iterations of the virus. The variant was estimated to account for 95.4% of the coronavirus cases identified in the United States as of Jan. 1, the U.S. Centers for Disease Control and Prevention (CDC) said on Tuesday.

The World Health Organization said on Tuesday that evidence thus far suggests Omicron is causing less severe illness. Nevertheless, public health officials have warned that the sheer volume of Omicron cases threatens to overwhelm hospitals, some of which are already struggling to handle a wave of COVID-19 patients, primarily among the unvaccinated.

Maryland Governor Larry Hogan declared a 30-day state of emergency on Tuesday and mobilized 1,000 National Guard members to pandemic response operations as COVID-19 hospitalizations in the state hit a record high of more than 3,000. That is an increase of more than 500% in the last seven weeks, Hogan said.

“The truth is that the next four to six weeks will be the most challenging time of the entire pandemic,” Hogan told reporters. “Our newest projections as of today show that COVID hospitalizations could reach more than 5,000, which would be more than 250% higher than our previous peak of 1,952 last year.”

‘Unlike anything we’ve seen’

In Kentucky, where Tuesday’s total of 6,915 new cases is the highest daily figure since the start of the pandemic, Governor Andy Beshear urged residents to get vaccinated and wear masks.

“Omicron is causing a surge unlike anything we’ve seen and at this rate our hospitals will fill up,” he wrote on Twitter.

The unrelenting surge has prompted more than 3,200 schools to close their buildings this week, according to Burbio, a site that tracks school disruptions. Schools that have remained open are facing staff shortages and renewed concerns about virus spread.

In Boston, where more than 54,000 students returned to class on Tuesday following the holiday break, Superintendent of Schools Brenda Cassellius told reporters there were 1,000 staff members out, including 461 teachers and 52 bus drivers.

“It does make for a difficult start to the day,” she said.

In Chicago, the teachers union objected to Monday’s return to schools, saying the district needs stricter protocols such as required testing. Teachers were expected to vote on Tuesday on whether they support working remotely starting on Wednesday.

More than 325,000 COVID-19 cases among children were reported in the United States for the week ending Dec. 30, according to the American Academy of Pediatrics and the Children’s Hospital Association, a new high and almost double the count from the previous two weeks.

The Biden administration is finalizing contracts for 500 million rapid coronavirus tests it plans to distribute for free to Americans, the White House said on Tuesday. The initiative is intended to help alleviate a testing crunch that has led to inadequate supplies and long lines in many places.

In addition, the administration doubled its order of Pfizer Inc’s COVID-19 antiviral pills to a total of 20 million treatment courses.

The CDC on Tuesday recommended shortening the interval between Pfizer-BioNTech’s second COVID-19 vaccine dose and the booster shot to five months from six, a day after the Food and Drug Administration made a similar move.