Comelec: May elections won’t be postponed 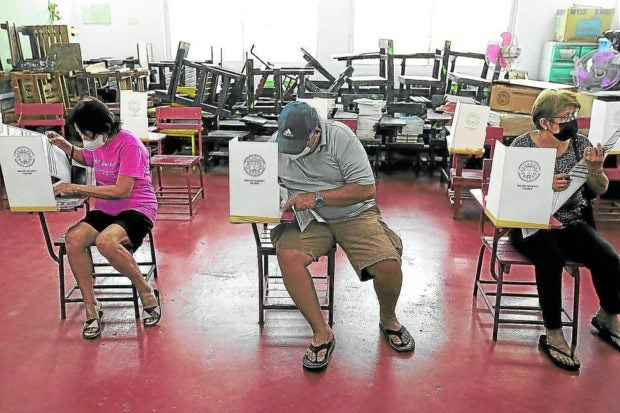 The Commission on Elections (Comelec) will not entertain petitions to suspend the May 9 general elections as postponing the political exercise for any reason will be in violation of the Constitution.

“How can you ignore the Constitution, right? All government authority basically emanates from the Constitution. If you are saying the Constitution should be ignored simply because you want to stay in power, then you have a big, big problem,” James Jimenez, spokesperson for the Comelec, said at a press briefing by video conference on Tuesday.

From the start, the Comelec had anticipated that certain quarters would try to postpone the elections, he said, adding, “So it is not surprising, but it is not something that could even be considered.”

Two lawyers who said they were part of a group called the National Coalition for Life and Democracy earlier asked the Comelec to suspend the May elections due to the pandemic.

According to Jimenez, he has not read their petition, which has not been included in the agenda of the Comelec en banc’s next weekly meeting.

‘We will have no delay’

“They could file all the petitions they want [but] as long as the Comelec doesn’t grant the request to delay the elections, then the elections would proceed; we will have no delay,” he said.

The poll body, on the other hand, was expected to decide today, Jan. 5, whether or not to approve the petition of the ruling Partido Demokratiko Pilipino-Lakas ng Bayan (PDP-Laban) to reopen the filing of certificates of candidacy (COC).

“The commission en banc will make the determination whether that is not something they would like to allow at this point,” Jimenez said.

“It is very likely that it will be taken up in the en banc [meeting] so after[wards], we should have some information on what will be done on the motion …,” he added.

The Comelec plans to start printing ballots by Jan. 15 after issuing the list of official candidates by Jan. 7.

Candidates who intended to run in the May 9 elections were given from Oct. 1 to Oct. 8 last year to file their COCs in order to be officially recognized by the poll body.

By Nov.15—the last day for substitutions due to the voluntary withdrawal of COC—the ruling PDP-Laban party was left without any candidate for both president and vice president.

The party is divided into two factions: one led by Energy Secretary Alfonso Cusi and the other by Senator Manny Pacquiao, with President Duterte aligning himself with the former group.

Go then became a substitute presidential candidate under the Pederalismo ng Dugong Dakilang Samahan party but eventually dropped out, saying it was not yet the right time. Mr. Duterte, who was vying for a Senate seat under the same party, also backed out of the race. INQ