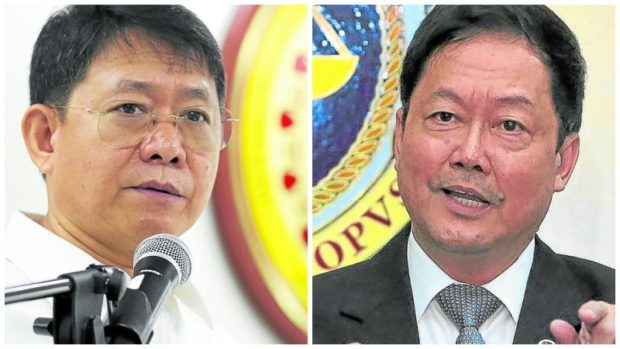 MANILA, Philippines — The Philippine National Police filed criminal complaints on Tuesday against a Filipino woman who violated quarantine regulations and eight other people, including her parents, who allegedly helped her skip a mandatory five-day isolation after her return from the United States before last Christmas.

The PNP Criminal Investigation and Detection Group (CIDG) said Gwyneth Anne Chua and the others violated Republic Act No. 11332, or the Mandatory Reporting of Notifiable Diseases and Health Events of Public Health Concern Act.

In the complaints it filed in the Makati City prosecutor’s office, the CIDG said Chua and the others failed to cooperate and comply with quarantine orders and violated the terms and conditions of directives issued by public health authorities under Section 1 (g) (iii) and (iv) of Rule XI of the law’s implementing rules and regulations.

According to the CIDG, Chua arrived at Ninoy Aquino International Airport on Dec. 22 and checked in at Berjaya Makati Hotel at 11:23 p.m. Shortly after, her father picked her up in a sport utility vehicle.

On Dec. 23, security camera footage showed Chua having dinner at Mijo Comfort Food restaurant in Makati City’s Barangay Poblacion. She later went to Kampai Japanese resto-bar, also in Poblacion. Kampai said in a statement that she arrived at 10 p.m. and stayed there until around 1 a.m. the next day.

Chua returned to Berjaya on Dec. 25 accompanied by her mother. She took a swab test the following day and was informed on Dec. 27 that she was positive for COVID-19. She was later transferred to another hotel for isolation.

The CIDG said it did not find sufficient evidence to file criminal complaints against the persons she interacted with at the restaurant and the bar who eventually got infected with COVID-19.

“However, CIDG recommends and encourages the said individuals to file a complaint before CIDG for further referral to the prosecutor’s office,” it said in a statement.

The Department of Health (DOH) said seven of 11 people with whom Chua had close contact, three of 26 who had “general contact” with her and one out of five second-generation contacts had all tested positive for COVID-19.

The DOH, however, did not categorically say they were all infected by Chua. It also did not disclose the coronavirus variant — whether Delta or Omicron — that Chua and the others were infected with.

Interior Secretary Eduardo Año said another Filipino woman who arrived from abroad on the same day as Chua also allegedly skipped her five-day quarantine at Seda Residences in Makati.

Año told dzBB radio on Tuesday that instead of checking in at Seda, she boarded a car that was waiting for her at the hotel. The car took her to her condominium at Bonifacio Global City in Taguig City.

The police said the woman, whom they did not identify, claimed in social media posts that she was exempted by the Bureau of Quarantine (BOQ) from mandatory quarantine. The BOQ denied this.

In compliance with regulations for quarantine facilities, Seda reported to the BOQ and the Department of Tourism that the woman was a “no-show,” according to Año.

Tourism Secretary Bernadette Romulo Puyat earlier said the woman even went for a massage and shared a video of it on social media.

Justice Secretary Menardo Guevarra on Tuesday said he also ordered the National Bureau of Investigation to “conduct a thorough investigation of possible willful violations” of mandatory quarantine regulations by travelers—from their arrival up to their stay in hotels or their homes.

According to him, Chua was just the “tip of the iceberg.”

He suspected that there was a “racket” for many “quarantine jumpers” starting at the airport.

“Instead of being taken to quarantine facilities, passengers might be allowed to go straight home or other places,” he said in a radio interview.

Two other prominent personalities have been charged with violations of health protocols in 2020—Sen. Aquilino “Koko” Pimentel III, who visited his wife at Makati Medical Center after testing positive for COVID-19, and former PNP chief Debold Sinas for ignoring physical distancing during his 55th birthday celebration when he was Metro Manila police chief while the country was still under enhanced community quarantine.

The Department of Justice had cleared Pimentel while the Taguig prosecutor had not yet decided on whether to charge Sinas in court.

Berjaya had publicly apologized for the “very serious breach” and said “any employee found errant by commission or omission will be dealt with severely to deter a repeat of what happened.”

Asked to comment during an interview with ANC on Tuesday on whether Chua should be declared a persona non grata by the city, Makati Mayor Abby Binay said that would be “petty” and that such a move was “reserved for someone who really deserves it.”

“She’s young, she’s callous, but she will have to suffer the consequences,” Binay said. She advised people who had been affected by Chua’s actions to file a civil case for damages against her.