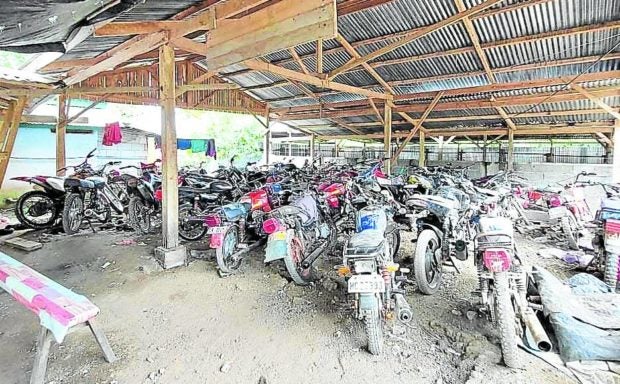 NOT STOLEN Relatives of Badrudin Masulot Dalid, the slain owner of SMZ Marketing, say the motorcycles kept in the makeshift warehouse beside his house in Pikit, Cotabato, are not stolen and have proper documents. —TAHER SOLAIMAN

KIDAPAWAN CITY, Cotabato, Philippines — Moro residents at Gokotan village in Pikit, Cotabato, dismissed police accounts of the Dec. 29 raid involving 400 alleged stolen motorcycles that resulted in the killing of six people and the wounding of three policemen and a resident.

According to Dalid’s daughters, the motorcycles seized from the family’s possession were not stolen and had proper documents which were seized by the raiding team. SMZ Marketing is engaged in buying and selling motorcycles.

The joint police and military operation was about to serve an arrest warrant to Maula Manampan, who was on the police’s list of most wanted persons, when they were fired upon by the suspects, according to Brig. Gen. Alexander Tagum, the regional police commander.

“The subject (Manampan) was able to escape taking advantage of the darkness while five armed suspects [died],” he said. Tagum said the government team discovered more than 400 units of assorted motorcycles hidden inside a makeshift warehouse and assorted improvised explosive device components.

He also said that around 50 heavily armed BIFF members were serving as security forces of Manampan, the alleged car theft syndicate leader who maintained a warehouse in Barangay Gokotan.

Accounts by Nursala Abdul Dalid and Maysarah Dalid Sager, Dalid’s daughters, said the raiding team arrived at 2:30 a.m. and went first to the house of Manampan, where they fired their guns. The sisters said Manampan’s house was about 175 meters away from their father’s, which was inside a compound.

Dalid, who was sickly due to diabetes and hypertension, also ran out of the house, assisted by a 16-year-old girl. He died from a bullet wound while the girl was wounded.

Kabunto, who was interviewed by the Inquirer on Dec. 31, 2021, said he was puzzled when the troops asked him to come out of his house. When his son Sharif, also known as Bunta, tried to open the door, the raiding team rained the door with bullets.

Arnal Timan, commander of the 129th Base Command of Bangsamoro Islamic Armed Forces, said the sixth fatality was Macagba, an officer under his command, who drowned in the nearby Maridagao River when he tired to cross it to avoid the clash with the government troops.

Cotabato Board Member Dulia Sultan said government troops should have coordinated with local officials before they entered the village.

Alamada said his group would file a protest in the Ahjag against the raiding team.