Winter storm pounds Washington as it moves across US East Coast 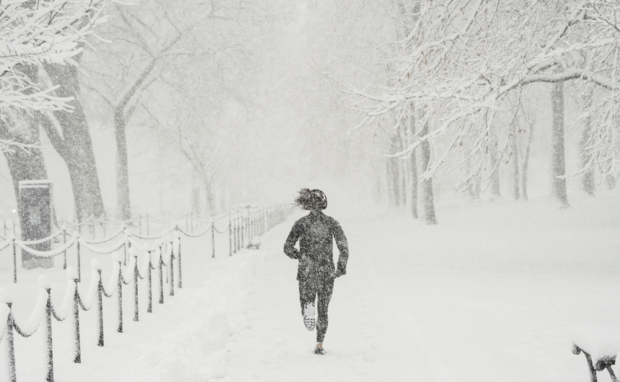 A jogger makes her way along the National Mall during a snowstorm in Washington, U.S, January 3, 2022. REUTERS/Kevin Lamarque

WASHINGTON — A winter storm unleashed heavy snow and strong winds throughout much of the U.S. Southeast and mid-Atlantic on Monday, forcing federal offices and schools to close, grounding airplanes and knocking out power for thousands of people.

Forecasts called for 4-8 inches (12-25 cm) of snow and winds up to 40 miles per hour (64 km per hour) in the region’s first blizzard of the season, according to the National Weather Service. Severe weather warnings were issued from the Carolinas to New Jersey.

“This is not a very typical setup for us, especially this time of year for us,” said Austin Mansfield, a weather service meteorologist in Virginia. “When we are talking highly populated areas, increasing accumulation of snow becomes problematic.”

The inclement weather forced federal government offices to close in Washington, while dozens of schools across the region canceled or delayed the start of school.

The heavy snow accumulated on roadways and power lines, causing treacherous travel conditions and leaving homes and businesses without electricity.

Some 770,000 electric company customers were without power in Virginia, Maryland, the Carolinas and Georgia, Poweroutages.us reported.

As of midday, 2,400 flights had been canceled and 2,900 had been delayed in the United States, Flightaware.com showed.

Reagan National Airport just outside Washington was under a ground stop as of 12:30 p.m. EST (1730 GMT), while Baltimore/Washington International Airport posted photos on Twitter of snowplows, snowblowers and salt trucks clearing snow from runways.

Airports across the region warned travelers to check the status of their flight with their airline before heading to the airport.

Even President Joe Biden faced delays as he arrived back in Washington. After the deboarding of Air Force One was delayed by 30 minutes so the runway could be plowed, the president covered his face from the blowing snow as he walked down the snow-covered stairs to his motorcade.

The president’s motorcade, which typically darts through Washington’s streets, crawled on its way back to the White House.

“Given the high rate at which the snow is falling, we continue to urge Marylanders in affected areas to stay off the roads, and allow the crews to do their jobs” clearing roads, Maryland Governor Larry Hogan wrote on Twitter.

Washington Mayor Muriel Bowser declared a snow emergency as public transportation in and around the city of 700,000 people was operating on a reduced schedule and faced delays due to the rough conditions.

“I can’t emphasize enough right now that you should stay off the roads,” Bowser said during a news conference. “The roads are very slick and hard to pass.”

Flood warnings were in effect in the Durham, North Carolina, area where 3 inches (7.6 cm) of rain fell and winds were blowing at 45 mph (72 kph).

Despite the weather, the public school system in North Carolina’s Wake County decided to hold classes for its 150,000 students on Monday. Some questioned that decision.

“I was just in the carpool lane at Wake Forest High school and witnessed a tree fall on a car. Huge pop & sparks from the power line above us,” wrote Twitter user Angela Carter. “This is unacceptable weather to have parents, teens & buses driving on the roads. Make better decisions!”