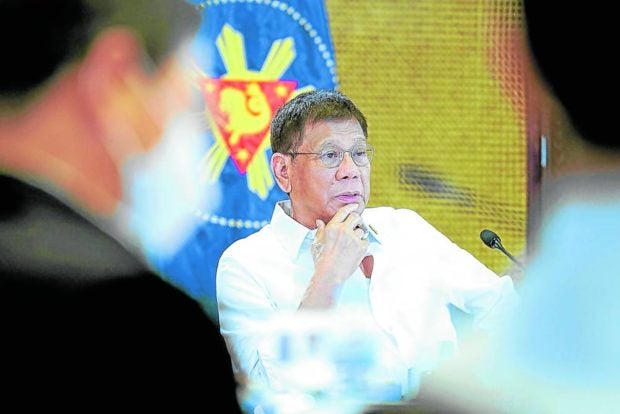 MANILA, Philippines — President Rodrigo Duterte has vetoed the establishment of the Human Rights Institute by the Commission on Human Rights (CHR) in this year’s record P5.02-trillion national budget while also slashing budgets intended for the poorest local governments and the controversial anti-insurgency fund.

Documents containing Republic Act (RA) No. 11639 or the Duterte administration’s last general appropriations act (GAA) showed that among the five budget items vetoed by the President was the special provision for the Human Rights Institute, “since no specific appropriation is provided for the purpose.”

“The creation of an institute, just like other offices, should be subject to a comprehensive review of the mandate, mission, objectives and functions, systems and procedures, and programs, activities and projects, as well as the corresponding structural, functional, and operational adjustments in an organization, including the necessary staffing and funding requirements,” Duterte’s veto message reads.

According to reports, the CHR just last month launched the Human Rights Institute during the International Human Rights Day celebrations.

Reports quoted CHR spokesperson Jacqueline de Guia as saying that the institute was supposed to serve as a “milestone” in educating the public and promoting human rights in the country.

The CHR is critical of Duterte’s deadly war on drugs, such that legislators allied with the administration in 2017 moved to grant the agency a mere P1,000 as its 2018 budget in retaliation.

Besides the veto on the CHR budget item, Duterte also disapproved provisions for the Department of Transportation’s (DOTr) gender-responsive restroom program and motor vehicle inspection system; the proviso including thrift, universal and commercial banks as well as non-bank financial institutions in the coverage of the Department of Agriculture’s (DA) agricultural credit facility; and the exclusion of lands owned and occupied by state universities and colleges (SUCs) from the Comprehensive Agrarian Reform Program (CARP).

Meanwhile, the President approved only conditional implementation, subject to specified conditions, of the fuel discount subsidy to farmers and fisherfolks; grant of transportation and teaching aid allowances to educators under the alternative learning system (ALS); as well as allocation of maintenance and other operating expenses (MOOE) to schools implementing face-to-face classes and lower courts supervised by the judiciary.

For local government units (LGUs), whose allocation now called national tax allotment (NTA) jumped by nearly two-thirds to P959 billion in the 2022 budget compared to their 2021 internal revenue allotment (IRA), Duterte ordered the conditional implementation of a couple of road and bridge rehabilitation projects and other capital outlay and social programs as long as aligned with the administration’s ambitious “Build. Build, Build” program.

The controversial support to the barangay development program of the National Task Force to End Local Communist Armed Conflict (NTF-Elcac) was also for conditional implementation and was set aside with only P5.62 billion in MOOE under the 2022 budget.

The approved budget for this NTF-Elcac program was a far cry from the original P28-billion proposal.

The GEF was separate from the bigger NTA for LGUs this year. The DBCC will issue the guidelines on GEF utilization.

Introduced in this year’s budget, the GEF was supposed to assist the “poorest and least-capable” LGUs during their transition to this year’s implementation of the Mandanas-Garcia ruling, which devolved to them certain functions previously done by the national government.

In the President’s earlier budget message in the then-proposed 2022 national expenditure plan (NEP) submitted to Congress last year, he said at least 16 provinces and 258 municipalities would benefit from the GEF. But with a smaller GEF, an also smaller number of LGUs can avail of the fund.

When the Department of Budget and Management (DBM) sought agencies’ 2022 budget proposals at the start of last year, it said the GEF was supposed to be among the priorities in this year’s spending plan.

“The GEF aims to cover the funding and capacity development requirements of basic infrastructure and other programs, projects, and activities of poor, disadvantaged, and lagging LGUs to gradually enable them to implement the functions and services devolved to LGUs by pertinent laws more effectively and efficiently. The fund is time-bound and performance-based, and shall be provided to LGUs for a fixed time frame,” former DBM chief Wendel Avisado told agencies in May 2021.

The DBCC, which groups Duterte’s economic team, also last May 2021 said the GEF was aimed at “addressing the problems of marginalization, unequal development, and high poverty incidence” among poorer LGUs.

The Supreme Court’s Mandanas-Garcia ruling will give LGUs more and bigger responsibilities previously shouldered by the national government given their larger budget allotments from all tax collections.

Its implementation will reduce the government’s fiscal space, such that Duterte issued Executive Order (EO) No. 138 in June 2021 to transfer to LGUs the responsibility to spend on local infrastructure, agriculture, social welfare, health care, and livelihood, among other sectors included in the Local Government Code.

While the Mandanas-Garcia ruling will provide LGUs with more money, they were expected to struggle spending their huge budgets to implement big-ticket programs and projects devolved by the national government through EO 138.

But the DBM last week said the implementation of the Mandanas-Garcia ruling was “another milestone towards genuine local autonomy as this presents a unique opportunity for LGUs to improve the efficiency and effectiveness of public services, by gradually taking on the functions which are already devolved to them under the 1991 Local Government Code.”

League of Provinces of the Philippines (LPP) national chairman and Quirino Gov. Dakila Carlo Cua told the Inquirer last week that “LGUs have been anticipating this correction in the computation of the LGU share on national taxes.”

“Since the passage of the Local Government Code over 30 years ago, much of the functions have been devolved to LGUs without adequate funding. This much-anticipated shift will definitely boost LGU’s capability to provide better services,” Cua said in a text message last December 30.