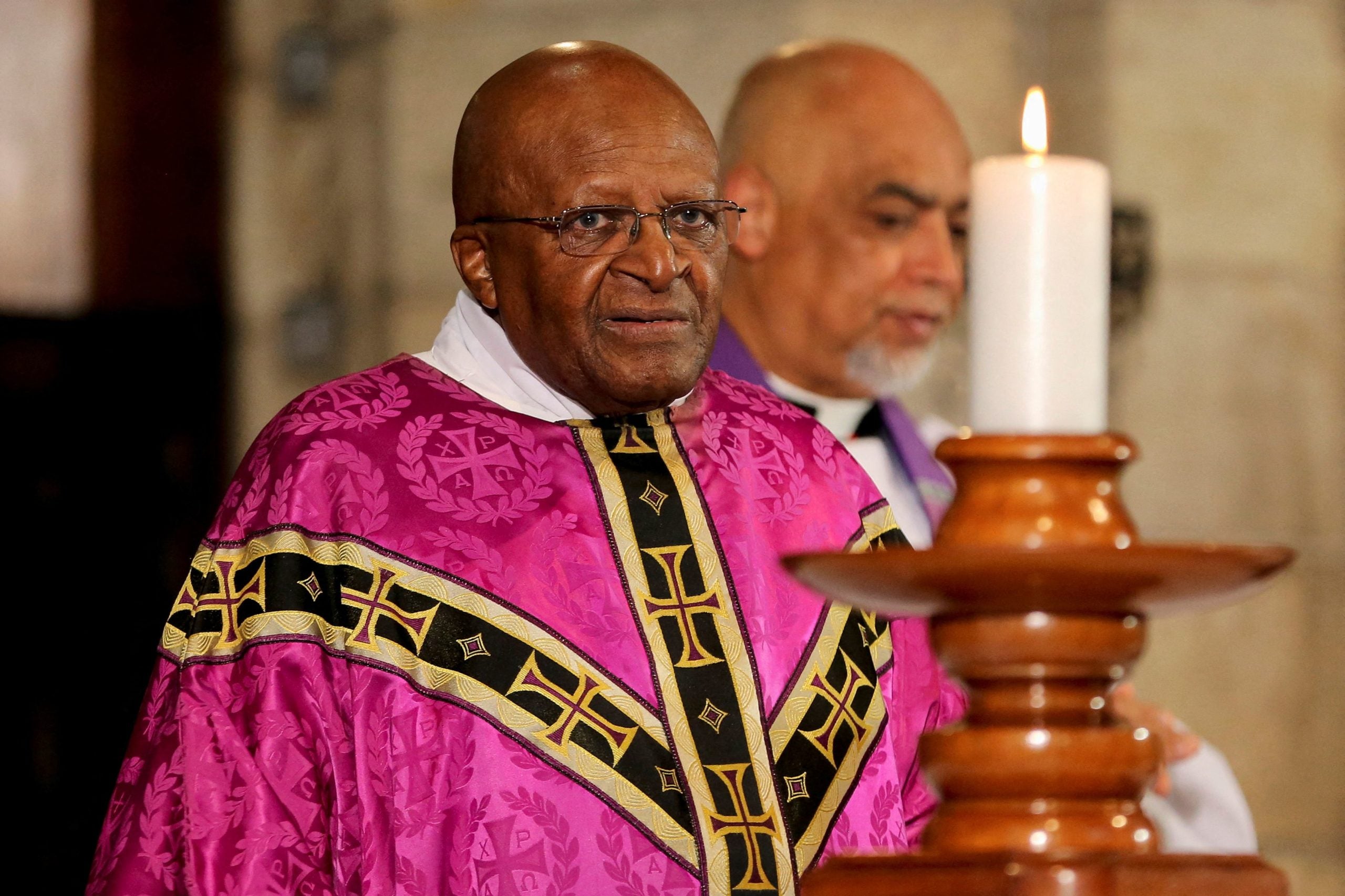 CAPE TOWN — South Africa on Saturday held a state funeral for Archbishop Desmond Tutu, the last great hero of the struggle against apartheid, that was stripped of pomp but rich in glowing tributes.

Famous for his modesty, Tutu gave instructions for a simple, no-frills ceremony, with a cheap coffin, followed by an eco-friendly cremation.

Family, friends, clergy and politicians gathered at Cape Town’s St. George’s Anglican Cathedral, which was illuminated in purple, the color of his clerical robes.

It was there where Tutu used the pulpit to rail against a brutal white-minority regime and it’s there he will be buried.

“Our departed father was a crusader in the struggle for freedom, for justice, for equality and for peace, not just in South Africa… but around the world as well,” said Ramaphosa.

“While our beloved (Nelson Mandela) was the father of our democracy, Archbishop Tutu was the spiritual father of our new nation”, lauding him as “our moral compass and national conscience”.

“His was a life lived honestly and completely. He has left the world a better place. We remember him with a smile,” said Ramaphosa before handing South Africa’s multicolored flag to the “chief mourner”, Tutu’s widow, Leah.

The flag — a reminder of Tutu’s description of the post-apartheid country as the “Rainbow Nation”, was the only military rite accorded to him, respecting his request before he died that military protocol be minimal.

The funeral ended South Africa’s week of mourning, with the diminutive rope-handled pinewood coffin, adorned by a small bunch of carnations, immediately removed from the church by vicars in cream robes.

Under a grey sky and drizzle, among the mourners ushered into the cathedral were ex-Irish president Mary Robinson, and Mandela’s widow Graca Machel. Both read out prayers.

Others included the widow of the last apartheid leader FW de Klerk, who died in November, and former presidents Thabo Mbeki and Kgalema Motlanthe.

Conspicuously absent was Tutu’s close friend, Tibetan spiritual leader the Dalai Lama, who failed to travel due to advanced age and Covid restrictions, according to his representative.

Tutu’s long-time friend, retired bishop Michael Nuttall, who was a dean when Tutu was the archbishop of Cape Town, delivered the sermon.

“Our partnership struck a chord perhaps in the hearts and minds of many people: a dynamic black leader and his white deputy in the dying years of apartheid; and hey presto, the heavens did not collapse,” said Nuttall.

“We were a foretaste… of what could be in our wayward, divided nation.”

Under apartheid, the white-minority government cemented its grip with a panoply of laws based on the notion of race and racial segregation, and the police ruthlessly hunted down opponents, killing or jailing them.

With Mandela and other leaders jailed for decades, Tutu in the 1970s became the emblem of the struggle.

The purple-gowned figure campaigned relentlessly abroad, administering public lashings to the Western world for failing to slap sanctions on the apartheid regime.

At home, he slammed police violence against blacks. Only his robes saved him from prison and became a shield from police brutality for many protesters.

After apartheid was dismantled and South Africa ushered in the first free elections in 1994, Tutu chaired the Truth and Reconciliation Commission, which exposed the horrors of the past in grim detail.

He would later admonish the ruling African National Congress for corruption and leadership incompetence.

Less than a kilometer away, dozens of people watched the funeral broadcast from a big screen despite earlier rains.