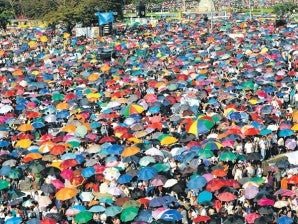 In a show of force amid perceived tension with their once staunch ally President Benigno Aquino III, some 600,000 members of the politically influential Iglesia ni Cristo (INC) gathered for a prayer rally Tuesday at Rizal Park in Manila.

Tens of thousands of INC members also assembled in the provinces.

The 1.8-million-strong sect, based on a 2000 government census, is one of a handful of religious groups courted by politicians of all stripes during election campaigns for its massive block vote that gives it huge political clout.

“The INC leadership and most of our members are displeased with how the [administration] is treating some of our brethren,” said the source, who asked not to be named because he was not authorized to speak on behalf of the sect.

“It seems that this [administration] is only interested in exacting revenge against its political opponents [instead of] bringing meaningful reforms for the good of the Filipino people,” he said.

Asked if the INC hierarchy would issue a statement against Mr. Aquino, he said: “Do we really have to say the words? The number of INC members who trooped to the event is enough indication of our position.”

Mr. Aquino’s previously strong ties with the sect appear to have soured since Chief Justice Renato Corona—who has indirect links to INC—was impeached in December, stirring condemnation from the group.

But the President said the sect had assured him the rallies were purely religious events leading up to the 100th anniversary of its founding next year.

“There are others who are saying that there is a political dimension here,” he told reporters.

In an interview on national television, Bienvenido Santiago, INC general evangelist and official spokesperson, said the activities were purely religious.

But an INC insider told the Philippine Daily Inquirer that the gathering was a “show of force to deliver a strong message” to the Aquino administration.

Although he was invited, Corona decided not to attend the prayer rally so as not to “politicize” the gathering, according to Supreme Court spokesperson Midas Marquez.

Midas said Corona and the other justices of the Supreme Court were invited to the rally but the Chief Justice decided to skip the gathering on the advice of his close associates.

“We’ve been receiving a number of comments that he might use [the rally] for political purposes,” Marquez said. “Just the same, he extends his congratulations to the Iglesia ni Cristo. I think all the justices were invited.”

Marquez said the Chief Justice decided to just watch the rally on television.

He said the invitation was a show of support for the entire judiciary.

“More than the Chief Justice, it’s the institution which is being supported,” Marquez told reporters before the start of the “Grand Evangelical Mission.”

While Mr. Aquino cannot stand for a second six-year term, the sect’s block vote can have an impact on the electoral success of his political allies in next year’s midterm congressional polls.

INC members had been leading rallies backing Corona, who could lose his job if convicted in an ongoing Senate impeachment trial on charges of graft and illegally favoring former President and now Pampanga Representative Gloria Macapagal-Arroyo. Arroyo is detained in a government hospital on a charge of electoral sabotage.

Mr. Aquino also fired an INC member, Magtanggol Gatdula, as National Bureau of Investigation chief last month after the official was accused of covering up the abduction of a Japanese woman by his aides.

Accompanied by fellow court personnel, Marquez arrived at Manila Hotel more than an hour before the start of the 5 p.m. prayer rally at nearby Quirino Grandstand.

He and his group were met by prominent INC members, among them Gatdula and Ferdinand Topacio, lawyer of  former First Gentleman Jose Miguel “Mike” Arroyo.

Marquez said he went to the event in deference to the personal invitation he received from the INC a few days ago.

Gatdula said his presence at the prayer rally was part of his commitment as a longtime INC member. Asked if he enjoyed the support of INC, Gatdula said: “Yes. I think so.”

Tiangco, who bolted the House majority after he refused to sign the impeachment complaint against Corona, also downplayed allegations that the INC event had a political dimension.

Except for a 20-year-old man, who allegedly tried to politicize the INC gathering, the sect stuck to its promise of avoiding political discussions.

A few minutes before the rally began, INC spokesperson Santiago told reporters in an interview that “the spin,” if anything, had helped the sect draw people to attend its “grand evangelical mission.”

Santiago himself did not mention Corona’s name or anything politically related during the interview. He said the event was part of the church’s 2012 mission to extensively spread God’s words.

Only two key INC figures were allowed to speak in front of the crowd: Reynaldo de los Reyes and Arnel Tumanan, assistant dean of the College of Evangelical Ministry.

He was arrested after he started distributing “libelous” leaflets at the entrance to the INC rally on Roxas Boulevard near the carabao statue.

“His leaflets carried antigovernment sentiments and his views on why (Supreme Court Chief Justice Renato) Corona was being impeached,” Po said.

“The estimate is already liberal because we included the entire park, not only Quirino Grandstand,” he said.

Po said the MPD crowd estimate at the grandstand, the elevated portion of the 528,833-square-meter park and the parade grounds, was 300,000.

Northbound traffic on South Superhighway and southbound traffic on North Luzon Expressway crawled on Tuesday morning as INC members began to gather at Rizal Park in Manila. Traffic was also heavy in other major streets of the metropolis.

In San Pedro, Laguna province, Beth Picart said about 500 members from the local INC church left the province on seven buses and a number of jeepneys at around 8 a.m. to take part in the group’s gathering in Manila.

A shortage of buses stranded INC members on Commonwealth Avenue in Quezon City, Alabang in Muntinlupa, and Calamba City. The Metropolitan Manila Development Authority deployed vehicles to Quezon City and Muntinlupa to fetch the stranded commuters.