Pope attends year-end service but does not preside as expected 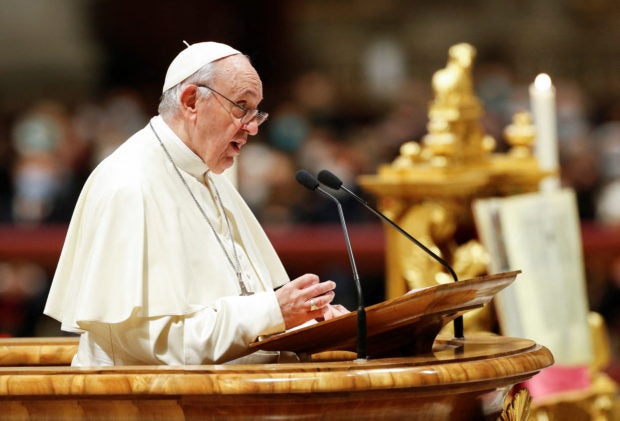 VATICAN CITY  – Pope Francis ended the year by attending a vespers service on Friday where he praised those who responded to the COVID-19 pandemic with responsibility and solidarity rather than an attitude of “every person for themselves”.

The pope did not preside at the service as had been expected, leaving that to a senior Vatican cardinal.

The Vatican did not explain why the change was made, seemingly at the last minute because the program for the ritual said Francis, 85, was to preside.

Francis, who walked in unassisted and appeared to be in good condition, used a white chair to the side, sitting for most of the service.

He later walked to a podium and read his homily, both without apparent difficulty.

Last year, Francis had to skip the service because of a flare up of a sciatica condition that causes pain in his leg.

Presiding would have required standing, kneeling and holding aloft a monstrance, a heavy gold vessel used to hold the communion host during vespers.

The pandemic loomed large at the service, with a cap of several hundred on the number of people allowed into St. Peter’s Basilica for the traditional year-end thanksgiving service known as the “Te Deum”.

COVID-19 also forced the pope to cancel his traditional visit to the nativity scene in St. Peter’s Square afterwards. The Vatican announced that change on Thursday, saying it was to avoid a causing a crowd to gather.

In his homily, Francis said the pandemic had caused many to feel lost and that in some cases “a temptation of every person for themselves” had spread.

“But we rose up again with a sense of responsibility,” he said.

With Rome Mayor Roberto Gualteri behind him, Francis, who is also bishop of Rome, also used his homily to lament the decay of the Italian capital.

For several years Romans have been living with a garbage collection crisis and with bins overflowing, particularly in residential areas.

Herds of wild boars hhave invaded some neighbourhoods to feast on the rubbish.

“Rome is a wonderful city that never ceases to enchant. But for those who live here, unfortunately it is not always dignified,” Francis said.