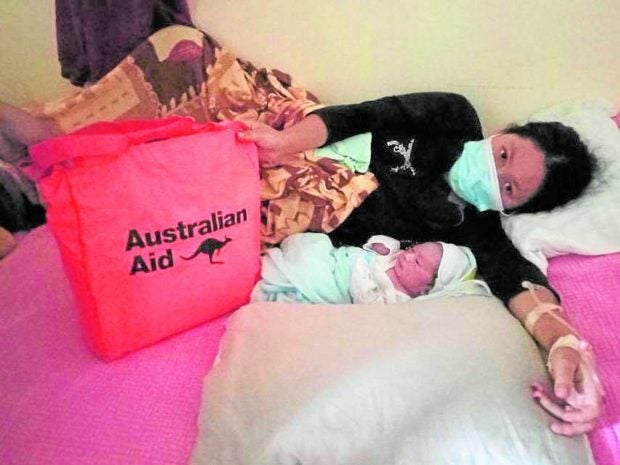 LONG-RUNNING CHALLENGE Aid donors are encouraged to also consider the needs of new mothers like “Jane,” one of the women in Dinagat Islands who received help from the United Nations Population Fund (UNFPA) after being displaced by Typhoon “Odette” (international name: Rai). —PHOTO FROM UNFPA

MANILA, Philippines — When Typhoon Odette (international name: Rai) slammed into the Dinagat Islands two weeks ago, a heavily pregnant “Jane” prayed hard that she would not go into labor that night.

As violent winds and heavy rains tore through her hometown of Cagdianao, the 20-year-old stayed for hours in the bathroom — the only concrete structure in the house — to keep herself and her unborn baby safe. The next morning, the family discovered that a felled coconut tree had crashed into their home and that the roof had been ripped off.

Fortunately, Jane did not experience labor pains until Dec. 27. But with the local birthing facility damaged by the typhoon as well, she had to take a tricycle to get to the nearest hospital 20 kilometers away.

Jane is among the 537,309 women and girls in 13 provinces in the southern Philippines who were heavily affected by the aftermath of Odette, the United Nations Population Fund (UNFPA) said on Wednesday. Long-running challenges, like gender-based violence and access to reproductive health care, worsen their situation during emergencies and humanitarian crises like typhoons, it said.

The UNFPA called on the Philippine government to swiftly restore protection mechanisms and services in the typhoon-affected areas, including hospitals and clinics, to protect the sector.

The numbers were consolidated from the Department of Social Welfare and Development’s disaster risk monitoring report for the most heavily affected provinces, including Dinagat Islands, Surigao del Norte, Leyte, Negros Occidental and Palawan.

Such was the case of Jane, who had to travel 20 km from Cagdianao to Dinagat District Hospital to deliver her baby.

With communities in tatters and households scrambling to rebuild, the risk of gender-based violence (GBV) is expected to increase in their communities, the UNFPA warned.

It estimated that at least 31 GBV service centers (e.g., women and children protection units) across the Visayas were affected by the typhoon.

Viador told the UNFPA that just hours after Odette barreled into the city, a GBV survivor came to the police station to complain that her husband had hit her.

For now, local and international organizations are helping fill the gap in social services in the afflicted area.

The UNFPA, for example, has set up emergency maternity tent facilities to augment destroyed health centers. Maternity packs are given to mothers and their newborns.

But ultimately, the UNFPA said, it would monitor and continue to advocate for the reactivation of protection mechanisms and access to gender-based services to support the care and recovery of survivors.