Rizal, the scientist, gets polymer statue 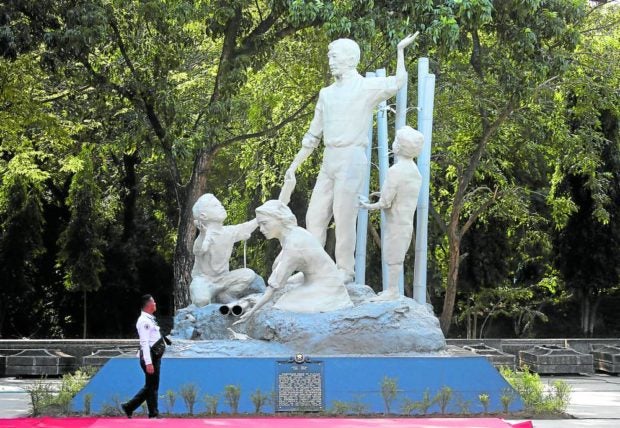 PEPE FOR OUR TIME: The country’s first 3D-printed monument of Dr. Jose Rizal is unveiled at the Department of Science and Technology complex in Bicutan, Taguig City, on Thursday, the 125th anniversary of his martyrdom. The image is based on a design by artist-professor Jose Manuel Sicat of the University of the Philippines. (Photo by LYN RILLON / Philippine Daily Inquirer)

National hero Dr. Jose Rizal has long been recognized for his novels that inspired the Philippine Revolution, leading to Filipinos being liberated from over three centuries of colonization.

But often overlooked in academic discussions is his contribution to the field of science, which the Department of Science and Technology (DOST) aims to highlight in the celebration of his 125th year of martyrdom.

On Dec. 30, Rizal Day, the DOST unveiled a 3.8-meter-high 3D-printed statue that depicts the national hero as a medical scientist, engineer/surveyor, agriculturist and naturalist-environmentalist.

Referred to as “Dr. Jose P. Rizal, The Filipino Scientist,” the monument was created at the Advanced Manufacturing Center (Amcen) of the DOST-Metals Industry Research and Development Center.

“It is our sincere hope that, through this monument, we will be connected to the past and live on to the nationalistic aspirations of Rizal,” Science and Technology Undersecretary Rowena Cristina Guevara said during a virtual presser.

The sculpture designed by professor Jose Manuel Sicat of the University of the Philippines’ College of Fine Arts was inspired by the works of scientists, historians and artists of the DOST National Research Council of the Philippines.

Sicat’s clay model was 3D- scanned and printed to link the traditional style of making sculptures to a new method in science known as additive manufacturing.

The statue not just showed Rizal in a static pose, Sicat said, but also featured his contributions to art through figures of children engaged in play around him.

“Rizal’s right hand was designed to show that he was handing down something to a child, just like how he passed on his knowledge to the next generation,” he said.

The left hand, meanwhile, was extended outward and toward an empty space to show the possibilities in the field of science and technology while the bottom part of the artwork depicted the irrigation system that Rizal created, Sicat said. 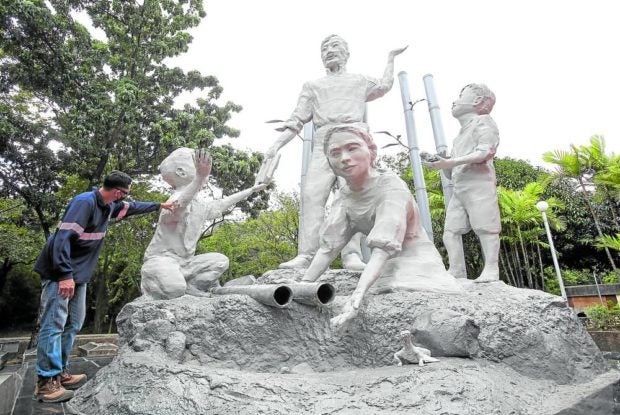 SAVANT IN THERMOPLASTIC: A worker of the Department of Science and Technology checks out the polymer material used to laser print the latest Rizal monument in Taguig City. (Photo by LYN RILLON / Philippine Daily Inquirer)

The monument is made of acrylonitrile styrene acrylate (ASA), which has chemical-resistant quality and high mechanical properties that can resist impact, high temperatures and ultraviolet light. It will be monitored after the unveiling for six months by the DOST to find out if ASA can be used as a material for outdoor monuments.

Aside from the statue, the DOST has been hosting various webinars on the life of Rizal as a scientist. The first one on Dec. 13 focused on his knowledge and expertise as an agriculturist. The second one, a talk show and live webcast, served as a commemoration of his 125 years of martyrdom and was held right after the unveiling of his 3D-printed monument on Dec. 30.

The third webinar on Jan. 25, 2022, will center on Rizal as a medical doctor while the fourth one on Feb. 2 will discuss his contributions to irrigation and civil works.

The last webinar on March 29 will tackle how the national hero’s legacy has inspired the younger generation.

Rarely highlighted in discussions about his life was Rizal’s inclination toward the natural sciences, engineering, medical science, and agriculture, the DOST said.

When he was incarcerated in Fort Santiago and during his exile in Dapitan, he studied numerous species, including insects, butterflies, amphibians and reptiles.

The specimens he discovered were delivered to the Dresden Museum of Ethnology. Some of them were even named after him, including Draco rizali, or a small lizard known as flying dragon; Apogonia rizali, a rare type of beetle with five horns; and Rhacophorus rizali, which is a frog species.

In engineering, his knowledge contributed to the creation of a waterworks systems for supplying potable water to the community in Dapitan.

As an ophthalmologist, he offered free consultations to people, with his mother, whose eyesight had been failing, as his first patient.

“If Rizal were alive today, I could picture him working here at Amcen and also creating other products using 3D-printing technology. Since he is a natural creative, I am sure that he would be happy to experiment using the new technologies here,” said Science and Technology Secretary Fortunato de la Peña.