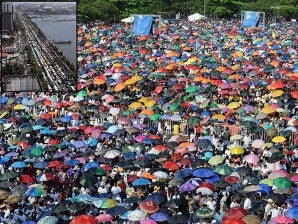 MANILA, Philippines – Except for the children who got lost, the grand evangelical mission held Tuesday by the Iglesia Ni Cristo (Church of God) was “generally peaceful” with “no untoward incident”, the head of the task force assigned to secure the religious event said.

Senior Superintendent Robert Po, of INC-GEM (grand evangelical mission), said that 18 cases of children who went missing but were also found were reported as the prayer gathering started at 5 p.m. and ended at 6:30 p.m.

“Only four children remain unclaimed at the post when I left to go around the grandstand,” Po said.

Chief Superintendent Agrimero Cruz Jr, Philippine National Police spokesman, said that the latest estimate of the crowd, including those along Roxas Boulevard from Delpan to the Philippine International Convention Center, was around 600,000.