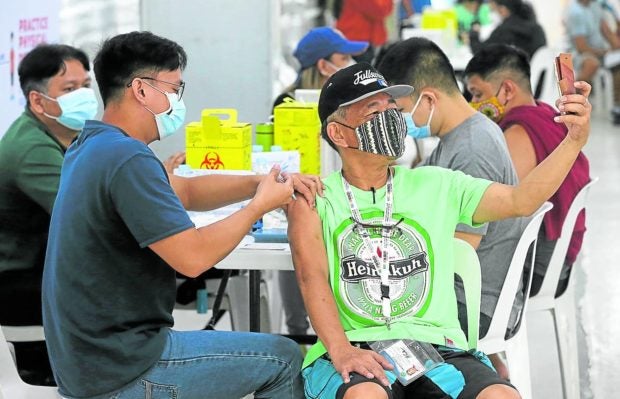 SOUVENIR SHOT An elderly resident of Marikina City on Monday captures in his mobile phone camera the moment that he receives his booster shot against COVID-19. —NIÑO JESUS ORBETA

MANILA, Philippines — The Department of Health (DOH) on Monday reported the detection of the fourth Omicron variant case of COVID-19 in the Philippines.

Health Undersecretary Maria Rosario Vergeire said the patient was a 38-year-old woman from the United States who arrived at Ninoy Aquino International Airport on Dec. 10 via Philippine Airlines flight PR-127.

The traveler apparently got the virus from friends in the US whom she met a day before coming to the Philippines.

“She was quarantined upon arrival. On Dec. 13, she had throat itchiness and colds and her specimen was collected on Dec. 14. When results turned positive on Dec. 15, she was then placed in an isolation facility,” Vergeire said in an online media briefing.

“She was discharged asymptomatic after a 10-day isolation on Dec. 24. She remains asymptomatic as of this time and is scheduled to be retested (today),” she added.

According to Vergeire, the patient is being monitored while continuing her isolation at home.

The latest case of the Omicron variant was detected from 46 samples that were recently sequenced. Of the total, 38 were positive for the Delta variant, which remained the most dominant strain in the country.

In its case bulletin on Monday, the DOH also reported a higher positivity rate of 2.2 percent — from 2 percent on Sunday — based on the 14,237 people who were tested on Saturday.

The country logged 318 new COVID-19 cases, bringing the total to 2,838,792 since the start of the pandemic. However, this did not include data from two laboratories that did not operate on Christmas Day and 26 other laboratories that failed to submit their data to the COVID-19 Document Repository System.

“Based on data in the last 14 days, the 28 nonreporting labs contribute, on average, 9.5 percent of samples tested and 6.4 percent of positive individuals,” the DOH said.

The DOH also reported 255 recoveries, which brought the total number of survivors to 2,778,002.

Vergeire also said that Metro Manila remained at minimal risk classification for COVID-19 with a negative two-week growth rate and an average daily attack rate (Adar) of 0.69 per 100,000 individuals.

The region’s one-week growth rate, however, stood at 49 percent.

“In the National Capital Region (NCR), the daily cases in the recent week showed an increase of 38 (or 49 percent) from the previous week, now averaging at 115 cases per day,” Vergeire said.

She noted that the positivity rate in NCR rose to 1.5 percent in the past week from 0.7 percent, while the country’s positivity rate also increased to 1.3 percent from 0.9 percent.

Vergeire said the slight increase in COVID-19 cases in Metro Manila was hopefully not caused by the Omicron variant, pointing out that the four detected cases of Omicron in the country involved people who all came from abroad.

“We are seeing an uptick in cases, which is not significant enough, but it is an alarm and a warning that cases might start to increase again. So we need to help each other,” she said.

“Hopefully, it is not variant-driven. We are seeing that the mobility has increased compared to previous weeks because of the holiday season, so we are counting two weeks prior to seeing the real picture. This uptick in cases started two weeks ago,” Vergeire added.

But even with the increase in case and positivity rates in the past week in NCR, Vergeire said the country, as a whole, was still considered at minimal risk for COVID-19 as the average number of cases remained lower in the recent week.

“If we plot the historical positivity rate per region based on patients’ [addresses], as of Dec. 25, we have observed that the positivity rate across all regions remains to be less than 5 percent,” Vergeire said.

Vergeire added that all island groups and the NCR Plus maintained a “flat case” trend.

Even with the increasing cases in Metro Manila, the independent pandemic monitor OCTA Research group said that there was no need to tighten restrictions as the latest numbers could just be due to Christmas gatherings and might go down later.

OCTA Research fellow Guido David said the full COVID-19 situation could not be seen now due to the fewer tests being conducted as many laboratories were closed for the holidays or were affected by Typhoon Odette (international name: Rai), adding that the picture could become clearer in January.

“As of now, we could not make a premature intervention because we have yet to see the full picture. But at the same time, this is a good reminder to the public to continue to be careful and to follow minimum public health standards, wear face masks, and get vaccinated if you’re unvaccinated,” David said at the Laging Handa briefing on Monday.

However, OCTA Research noted the increase in Metro Manila’s COVID-19 risk in the past week and moved Metro Manila from “very low risk” classification to “low risk.”

David said the seven-day average of new cases in Metro Manila increased to 116 as of Dec. 20-26.

“We must continue to be vigilant and practice minimum public health standards as we head into the new year,” he added.

Meanwhile, the local government of Muntinlupa on Monday warned the public to take extra caution as the number of COVID-19 cases in the city increased from five to 20 between Dec. 20 and Dec. 26.

According to the City Health Office, the increase in local active cases was attributed to travelers who subjected themselves to COVID-19 testing for travel purposes.

Makati also saw a slight increase in the number of COVID cases from 19 on Dec. 20 to 32 on Dec. 26, bringing the total number of confirmed cases in the city to 45,204, the local government said.

In Mandaluyong, five new cases were recorded on Sunday as the city logged a total of 26 active cases.