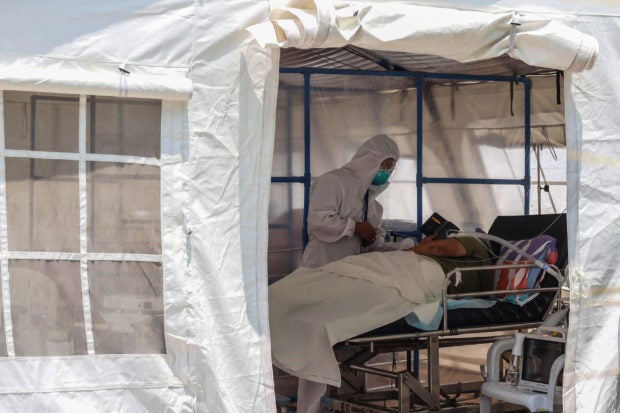 This photo taken on April 6, 2021 shows a relative wearing personal protective equipment attending to a family member with COVID-19 at a makeshift ward in a hospital in Manila. More contagious variants of the coronavirus have been blamed for a record surge in infections in Metro Manila that has overwhelmed hospitals and sent the national capital region into lockdown. (Photo by JAM STA ROSA / AFP)

MANILA, Philippines — The Private Hospitals Association of the Philippines Inc. (PHAPi) is encouraging its members to observe a “PhilHealth holiday” from January 1 to 5 next year in support of other hospitals that have announced plans to cut ties with the state health insurer.

PHAPi President Dr. Jose De Grano said the PhilHealth holiday is an act of support for the Far Eastern University-Dr. Nicanor Reyes Medical Foundation (FEU-NRMF) Center  which will no longer renew its accreditation with the health insurer, and seven major private hospitals in Iloilo City that plans to cut ties with PhilHealth by January next year due to unpaid claims.

(Other hospitals may find it hard to cut ties with PhilHealth because there are services that are dependent on the agency. We will show that we support these hospitals as we encourage our members to observe a PhilHealth holiday from January 1 to 5.)

(We will not deduct PhilHealth benefits temporarily.)

FEU-NRMF earlier said its receivables had already reached P114 million and their exposure had grown by roughly P8 million month-on-month due to PhilHealth non-payments.

Meanwhile, seven major private hospitals in Iloilo City have announced plans to disengage from PhilHealth due to unpaid claims amounting to more than P545 million.

Despite the hospitals’ plan for disengagement, PhilHealth remains hopeful that its Debit-Credit Payment Method, which provides for the fast release of funds to qualified hospitals while their reimbursement claims are still under process, could stop hospitals from cutting ties with the agency.