Another storm unlikely to hit PH before the year ends, says Pagasa 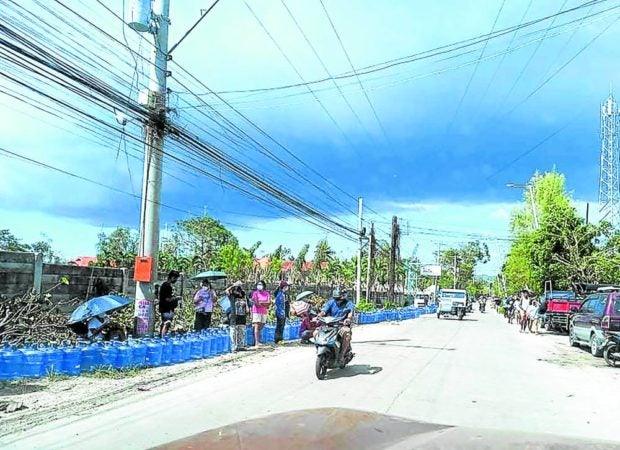 A long queue of plastic water jugs has formed along a road in Tagbilaran City in Bohol province, as residents yet to recover from the trauma of Typhoon “Odette” (international name: Rai) face another creeping calamity—a shortage of basic supplies.  (AFP)

MANILA, Philippines — Typhoon Odette (Rai) could be the last tropical cyclone to hit the Philippines in 2021.

Tropical cyclone formation in the Philippine area of responsibility is less likely in the next five days, the state weather bureau said Sunday.

Odette was said to be one of the strongest storms to have struck the Philippines, which sees an average of 20 cyclones a year.

Its volume of rainfall was more than Supertyphoon Yolanda (Haiyan) in 2013, the strongest typhoon in the Philippines, which had almost the same path as Odette.

Almost 400 people were killed from Odette since it swept across Visayas and Mindanao in mid-December, based on the official death toll. Rescue and relief efforts continue.

Meanwhile, the northeast monsoon will be the dominant weather system in the country in the next few days, and will bring cool weather to most parts of Luzon.

Metro Manila and the rest of the country will have fair weather and chances of isolated light rains.

It will be rainy in Southern Luzon and Visayas in the coming days due to the presence of a shear line.

RELATED:
Other ‘Odette’ challenge: 120 ships crippled
They prepared for Signal No. 3, but proved wrong about ‘Odette’