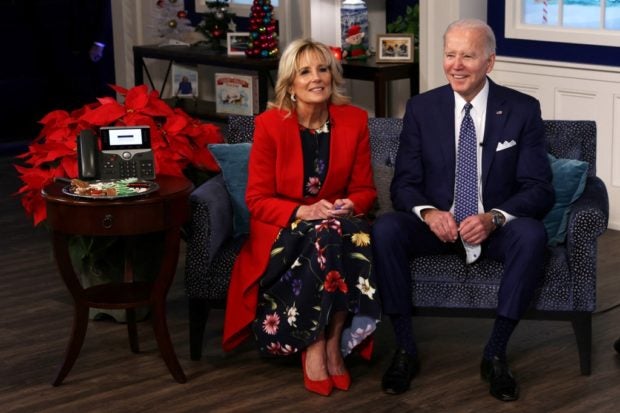 WASHINGTON — President Joe Biden was trolled by a caller Friday who said “Let’s Go Brandon” — a coded insult that has become a rallying cry for supporters of Donald Trump — during a White House Christmas Eve event.

After being assured of St Nick’s progress, the president fielded calls from several American families.

One man identified himself as “Jared,” a father of four. Biden spoke briefly with the caller’s children, asking what presents they wanted for Christmas and telling them they needed to be in bed before midnight. He also remarked on how he and Jared both had sons named Hunter.

Wrapping up the call, Biden wished Jared a “wonderful Christmas.”

“I hope you guys have a wonderful Christmas as well, Merry Christmas, and let’s go Brandon!” Jared replied.

“Let’s go Brandon, I agree,” returned Biden, without reacting to the dig. It was not immediately clear if the president had understood the reference, though Jill Biden chuckled uncomfortably and rolled her eyes.

Biden asked Jared where he was calling from, but by then the call had been disconnected. A clip of the moment spread widely on social media, with some praising the president for his calm response.

“Let’s Go Brandon” is a euphemism for a vulgar insult that originated when a reporter at a NASCAR event misheard a chant of “F- Joe Biden” while interviewing driver Brandon Brown in September.

Since then it has been taken up as a political slogan by supporters of Trump, Biden’s predecessor.

Trump had his own headline-grabbing Christmas Eve moment when, in 2018, he raised doubts about Santa’s existence in a call with a seven-year-old boy.

“Are you still a believer in Santa Claus? ‘Cuz at seven it’s marginal, right?” he said.

The Santa tracker presented by NORAD dates to 1955, when a Colorado newspaper advertisement misprinted a phone number to connect children with Santa and mistakenly directed them to the military nerve center hotline.