Active COVID-19 cases within PNP now down to 13 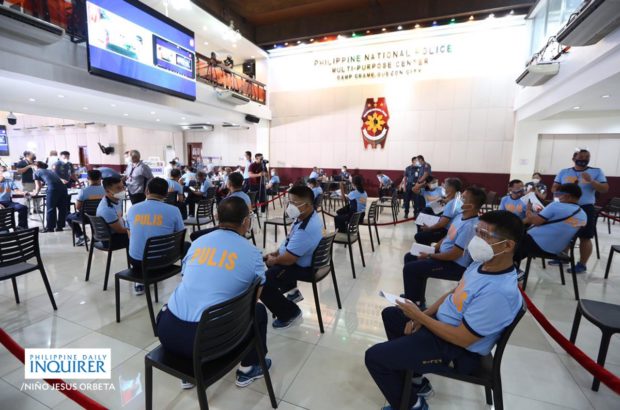 Police personnel recieve Sinovac vaccine during a simultaneous COVID-19 inoculation of members of the police force in the NCR under the A4 priority group in Camp Crame, Quezon City on Tuesday, June 15. — NIÑO JESUS ORBETA/PHILIPPINE DAILY INQUIRER

MANILA, Philippines — With zero new COVID-19 infections recorded in six of the last seven days, the active cases within the Philippine National Police (PNP) has gone down to just 13 as of Friday, December 24.

Numbers released by the PNP’s Public Information Office showed that instead of new infections, three patients actually recovered from the disease, pushing the recovery count to 42,108.

No new deaths were also recorded which mean that the death toll remained at 125.  All in all, 42,246 confirmed cases have been tallied.

In the past, the PNP leadership has attributed the low number of cases to the high vaccination rates within the organization.  Last December 5, PNP chief Gen. Dionardo Carlos said that they have been trying to narrow the gap, with less than one percent of uniformed and non-uniformed personnel remaining unvaccinated.

Carlos previously said they would not be deploying unvaccinated officers to jobs that require high interaction with other people, which meant that they would be asked to do storage work and administrative duties.

However, some officers, Carlos added, were convinced to have themselves vaccinated as they do not want to leave their posts.