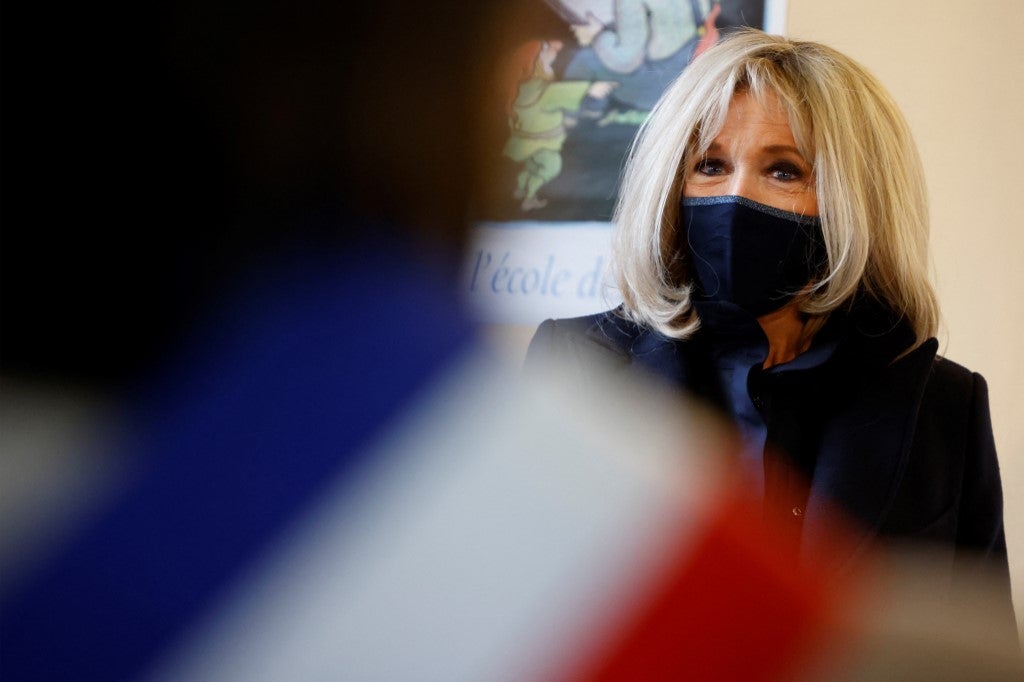 French first lady Brigitte Macron attends the presentation of a “Buddy” tele-education robot during a visit at Jules Ferry elementary school on December 3, 2021 in Ormesson-sur-Marne, near Paris. (Photo by Ludovic MARIN / AFP)

PARIS, France — A disinformation campaign has in the last days targeted the wife of French President Emmanuel Macron falsely claiming she was a born a man, adding to fears over internet fake news less than four months ahead of presidential elections.

Brigitte Macron, 68, intends to file a legal complaint to sue over the disinformation. “She has decided to start procedures, it’s in process,” her lawyer Jean Ennochi told AFP, without giving further details.

The false claim had grown in momentum on social media over the last days, mixing strong opposition to the centrist Macron with extreme right ideology and transphobia.

Fake news of transphobic nature targeting prominent political figures has been very rare in France until now, but is not a new phenomenon globally.

But the eruption of attacks against Brigitte Macron comes as her husband, who celebrated his 44th birthday on Tuesday, prepares to fight what is expected to be a tense battle to seek re-election in April.

Macron’s relationship with his wife 24 years his senior as always attracted fierce media interest in France and outside. They first met when she led a drama class while he was still a teenage schoolboy.

This is not the first time that the Macron couple have been targeted by rumors targeting gender or sexual orientation. During the 2017 campaign when he won office, Emmanuel Macron had to deny claims about his alleged homosexuality.

For several months, messages have multiplied on social networks claiming that Brigitte Macron, born as Brigitte Trogneux, is a transgender woman whose first name at birth was Jean-Michel.

The false claims allege that a vast plot has been engineered to hide this change in civil status and, taking the conspiracy theory a step further, say accusations of paedophilia have been covered up.

This fake news first circulated in a very low-key way.

The first such claim appears to have been made on Facebook in March by a user calling themselves “Natacha Rey”. The page of this “journalist” is swarming with conspiratorial theories and diatribes against the so-called “health dictatorship”.

They were seized on by another Facebook user to make up the conspiracy theory that Brigitte Macron is a “satanist paedo-criminal transgender”, a term echoing the QAnon conspiracy movement which originated in the United States and claims the world is ruled in secret by a paedophile elite.

The spreading of the claims began in mid-October with the publication of an article on the supposed “mystery of Brigitte Macron” in “Facts and Documents”, a review founded in 1996 by the shadowy ultra-right writer, Emmanuel Ratier, who died in 2015.

“Natacha Rey” claims to be the origin of the so-called investigation.

Almost two weeks after its publication, the hashtag #JeanMichelTrogneux appeared for the first time on Twitter on November 1 before being spread by a relatively little-followed account “Le Journal de la Macronie” which is staunchly opposed to the president, according to the InVid We Verify data analysis tool developed for AFP.

For nearly a month, the hashtag was not greatly visible, but experienced a spectacular rise in popularity from the beginning of December. On December 6, it generated only 35 tweets, but produced more than 13,000 three weeks later.

According to InVid’s latest count, the hashtag has so far generated 68,300 retweets and over 174,000 likes. The interpretation of these figures is not unambiguous as the count includes both those who use the hashtag to promote their cause but also those who highlight the trend to denounce it.

As with many conspiracy theories, its main promoters come from a very diverse movement ranging from Covid-sceptics to French ultra-nationalists.

According to InVid, the Twitter account that posted the most messages on this fake news is thus run by a supporter of “Frexit” — France’s withdrawal from the EU — while the most retweeted user runs an online media denouncing “propaganda” over the Omicron Covid variant.