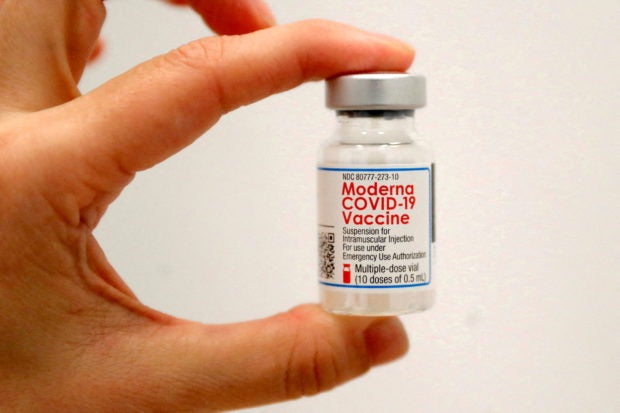 Moderna Inc said on Monday that a booster dose of its COVID-19 vaccine appeared to be protective against the fast-spreading Omicron variant of the coronavirus in laboratory testing and that the current version of the shot would continue to be its “first line of defense against Omicron.”

The company said its decision to focus on the current vaccine, mRNA-1273, was driven in part by how quickly the recently-discovered variant is spreading.

Moderna said it still plans to develop a vaccine to protect against Omicron specifically and hopes to start clinical trials early next year.

“What we have available right now is 1273,” Dr. Paul Burton, Moderna’s chief medical officer, said in an interview. “It’s highly effective, and it’s extremely safe. I think it will protect people through the coming holiday period and through these winter months, when we’re going to see the most severe pressure of Omicron.”

Moderna President Stephen Hoge on a conference call said the company currently does not plan to pursue approval for the higher booster dose.

The antibody levels generated by the lower dose shot “are comfortably above” what would signify a risk of breakthrough infections for other variants of concern, Hoge said.

Moderna did not specify whether it believes its two-dose regimen will reduce hospitalizations or deaths from the Omicron variant. Studies by other researchers have shown a “reasonable and robust” T cell response is maintained against the variant, Hoge said, which could suggest protection against severe disease. T cells in the immune system recognize and eliminate virus-infected cells.

The new data, which has not yet been peer reviewed, tested blood from people who had received Moderna’s vaccine against a pseudovirus engineered to resemble the Omicron variant. It is similar to data discussed last week by top U.S. infectious disease expert Dr. Anthony Fauci.

It may not be necessary to push antibody levels higher than those generated by the 50-microgram dose for many people, said Hoge. Governments could, however, choose a higher-dose version if they want to confer an enhanced level of protection.

The company said the 100-microgram dose was generally safe and well tolerated, although there was a trend toward slightly more frequent adverse reactions.

Both the Moderna and the Pfizer/BioNTech vaccines have been linked to rare cases of heart inflammation, particularly in young men. Several studies have suggested that Moderna’s vaccine is likely to cause the heart inflammation at a higher rate than Pfizer’s.

Omicron, a highly contagious variant first detected last month in southern Africa and Hong Kong, has raced around the globe and been reported in 89 countries, the World Health Organization said on Saturday.